I want to make a yule log for Christmas day so I thought I’d better practise.  I found a vegan recipe and really helpful instructions at Vegan Good Things but, being both lazy and impatient, I decided to try to make a simpler version.  I am very grateful to Leinana at Vegan Good Things for the how to part of the recipe and you should check out her post as she explains it much better than I will 🙂

So, I adapted the raspberry buns recipe from Well Fed … like so:

(Oh, first I preheated the electric fan oven to 190°c)

Can anyone spot my mistake?  Look at the photo above.  Well, I didn’t realise what I’d done until I looked at the photo when I came to write this post.  Have you spotted it? …….

Yes, I used corn flour instead of baking powder!  Well the packaging is exactly the same, apart from the big black letters that spell CORN FLOUR!!!!

Ok, so I mixed all those ingredients together and poured the mixture onto the tin.  Oh, I forgot to tell you – first prepare a flat tin by covering it with parchment paper smeared with margarine.  See, I told you Leinana explains it better than me.

Then I smoothed it over with the back of a spoon so that it filled the tin.

Like so.  And bunged it in the oven for 10 minutes.  While it was cooking, I laid a clean tea towel on the work surface and covered that with another sheet of parchment paper.

Dusted the paper with organic icing sugar.  When the ten minutes was up, I took the cake out of the oven.

And tipped it over onto the dusted paper.  You have to do it real quick.  I was a bit too cautious and it cracked at one end.

Nevermind.  Then I quickly peeled the parchment paper off the top and, using the tea towel, rolled up the cake.  Again, Leinana explains it better, pop over to her place.

Then I put it to one side to cool.  Next the icing, and again I kept it simple.  Just vegan margarine, icing sugar, cocoa, a teaspoon of vanilla essence and a little drop of hot water from the kettle. 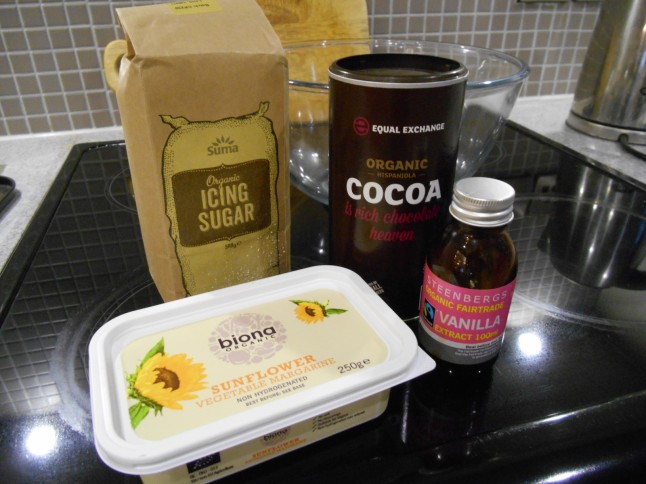 I don’t measure, just wing it and then adjust to taste.  I did of course sieve the icing sugar and cocoa to get rid of all the lumps so I’m not irredeemably lazy 😉 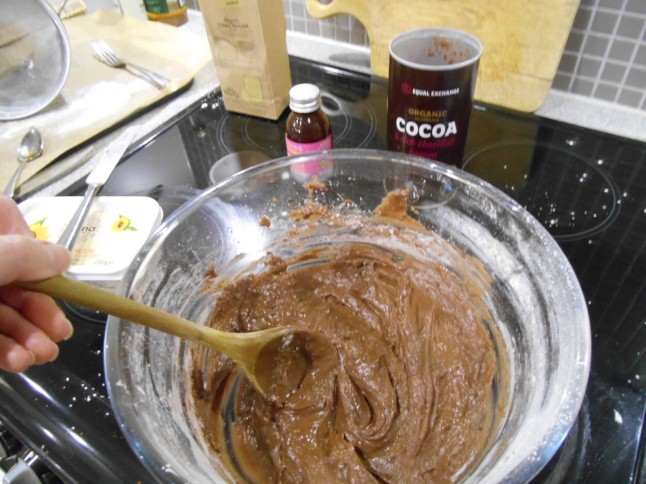 When I was happy with it I put it in the fridge.  The next challenge was to distract myself so that I wouldn’t try to ice the cake before it was fully cool.  And it was taking a long time to cool.  Too long.  I gave in in the end – well, it was cold on top 😀 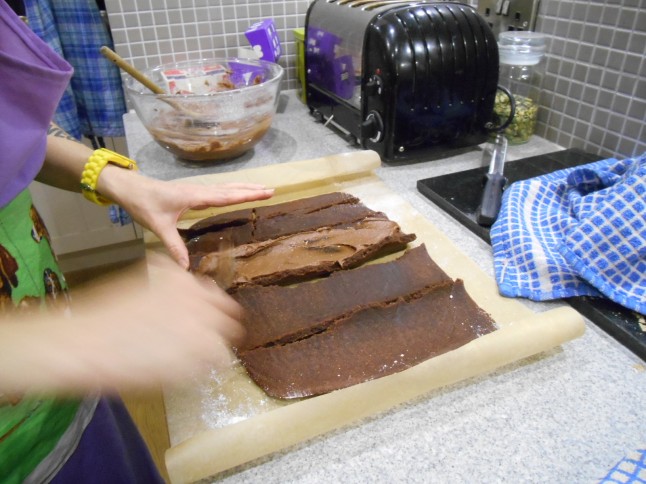 And when I unrolled it, it broke into strips.  I continued undeterred.  Each strip was still curvy so I hoped it would work.

I pasted generous amounts of icing over top of all the bits and then, using the parchment paper, rolled it back up.

Not bad considering.  It did slide a bit – it was too warm and the icing was melting a bit but, nevermind.  I put it on a plate and covered it in more icing which helped hold it together. 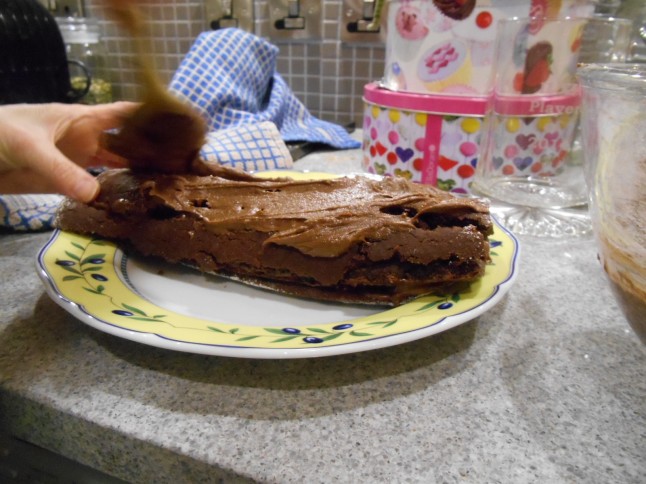 Then I dragged a fork over it to make bark grooves 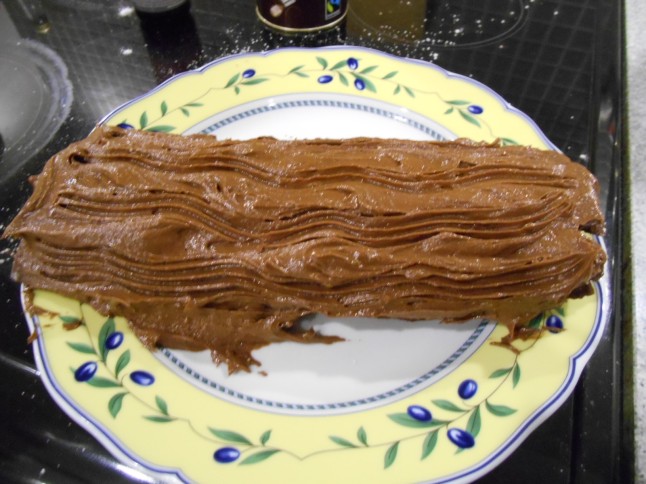 Then sieved some ‘snow’ over it 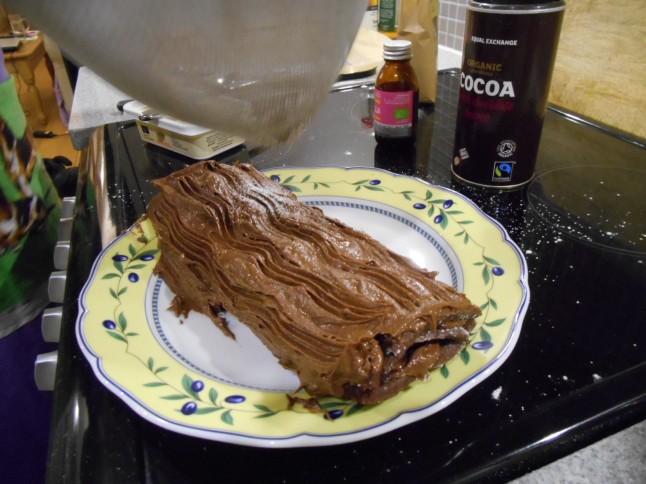 And the verdict?  Despite being made with corn flour instead of baking powder, the cake itself is very nice.  The icing makes the log a bit too sweet and sickly for me, although husband and daughter didn’t think so 🙂 , so I think for my next attempt I will use a raw recipe for the icing – that way the whole thing will be sugar free! 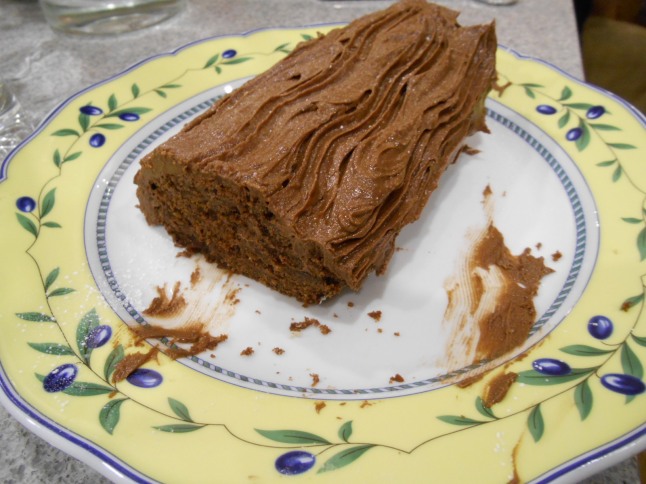