To read the rest of the Luke Walker stories, click here 😀

A noisy, activity-filled party with only two adults in attendance was easy to sneak away from.  It hadn’t even been difficult to get the matches from Mr Beardsley’s desk drawer.  Fortunately there had been no rain for a couple of weeks so it didn’t take long to find ample dry twigs and fir cones in the churchyard over the road.  Now all they needed was a big stone each and that would be no problem either because Luke remembered seeing some different coloured pebbles, curiously arranged in the shape of a fish, close to the church entrance.  They’d just been left there.  No one was using them.

It was just after nine o’clock and very dark in the churchyard.  Two owls hooted back and forth.  Every so often bats flew overhead between the bell tower and the vicarage.  Now it really felt like Halloween.  The children made themselves comfortable on the ground near the oldest gravestones they could find.  Covered in lichen, the writing on them was almost illegible. 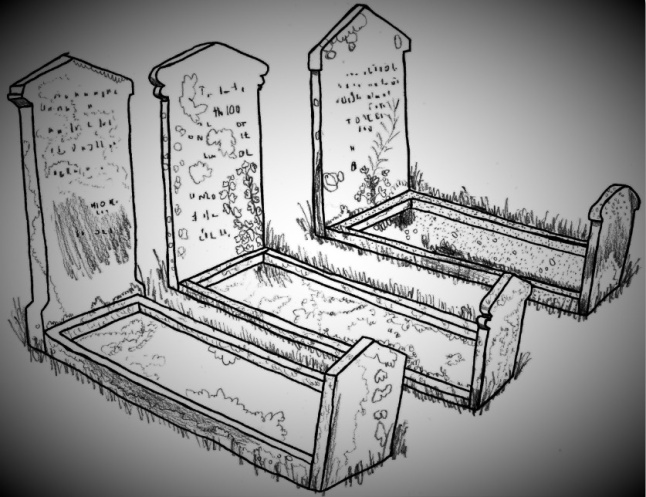 Making sure there was nothing flammable nearby, Luke built a small fire with the twigs and fir cones on the crumbling horizontal stone base of one of the graves.  He had no trouble getting it going with the few scraps of paper found in Mr Beardsley’s desk drawer earlier.

As their teacher had told them, the game was simple.  On Halloween night, participants made a fire and when the fire burnt out they placed a ring of stones in the ashes, one for each person.  The following morning they would check the circle and if they found any stone displaced, it was said that the person it represented would die before the year ended.

Luke drew a circle in the ash with another stick.  Their pebbles were easy to distinguish from each other.  Luke’s was the biggest and the darkest.  He put it in the twelve o’clock position, closest to the gravestone.  Joe’s was a little smaller and had a notch on one side.  He placed it at nine o’clock.  Isabel’s looked like it had a nose, hers was placed at six o’clock and Tania’s, the smallest of them all, was placed at three o’clock.

“What was that?” Isabel turned suddenly to look behind her.

The boys looked around eagerly, hoping to see some majestic nocturnal wildlife.  They weren’t so lucky.

“We’d better get back,” said Tania, looking at her watch, “it’s nearly five to ten.”

“Wait!” whispered Luke as he ducked behind a tree, “that’s my dad!”

The churchyard was a short-cut between the school and Luke’s road so he might have known his dad would come this way to meet him.  Everyone laid low until he’d passed.

“My mum’s probably at the school by now too,” said Tania.

“They’ll all be there, waiting outside the classroom for us,” said Isabel anxiously, “how will we get back in without them seeing us?”

Luke and Joe smiled at each other.  For seasoned outlaws like them, this wasn’t going to be a problem.

“Follow us,” said Joe, and they led the girls to a little known entrance to the school which was always left open when the caretaker was around so that he could duck out quickly for a smoke without going past the kitchens or the offices.  The door led to the school hall which had a connecting door to Mrs Tebbut’s classroom which shared a cloakroom with Class 5A.

“Don’t tell anyone about this,” Joe added as an afterthought.

Without raising suspicion all four of them rejoined the rest of their class as they emerged from the party. They parted with a secret promise to meet early Saturday morning and check on the fire circle.  Each agreed to wait until they were all together before they looked.

When all children had been collected Mr Beardsley and Thomas returned to the classroom to clear up the mess.  They were tired but it had been fun; they were glad they’d done it.

“Excuse me,” Mrs Butler put her head round the door.

“Oh, hello,” said Mr Beardsley, “are you looking for your plate?  It’s in a stack in the sink.  I’ll wash it up and send it home with Simon on Monday.”

“Er, thank you, no, I’m looking for Simon.  Did he leave with someone else?”

Mr Beardsley’s jaw dropped.  Filled with dread he looked at Thomas.  Thomas shook his head.  At that moment the classroom door opened again and Simon walked in.

“Simon!  Where have you been?” his mum asked, awash with relief.

2 thoughts on “Easy for seasoned outlaws”