Luke Walker and the new shoes

Luke was having a stressful day.

He looked down at his left plimsoll for proof and was satisfied that he could hardly see his big toe.

“In fact,” he said out loud, “I’m sure if someone who dint know it was there looked at my feet, they wun’t notice it at all.”

Mum disagreed.  She quite unreasonably insisted that a big toe sticking through a hole in one’s shoe was an unmistakable sign that it was time to get new ones.

It was 4.17pm.  Luke and Mum were in the fifth and final shoe shop their home town had to offer.

“This is it Luke,” Mum said testily, “this is the last one. We will be buying shoes from this shop.”

She picked out four different styles and put them down in front of him.

Luke looked at them with disgust.

“ Brown?  You want me to wear brown shoes?  I am not wearin’ brown shoes!”

Mum removed the two brown ones and, through gritted teeth said of the remaining two,

“Choose one of these or I will choose for you!”

If he had to have new shoes when he didn’t even need new shoes he would have chosen blue ones.  He would have chosen blue plimsolls.  They were comfortable. They were good for running in.  And blue happened to be his favourite colour.  But Mum said plimsolls were not proper shoes.  She said they were not suitable for wearing in wet weather.  She said they were not smart enough for school.  She said he had to have those shiny sort of hard shoes that give you blisters for the first two weeks.  Luke had put up strong resistance all day long but now it looked like he would have to compromise.  It came down to two different black shiny shoes and one of them had tassels. 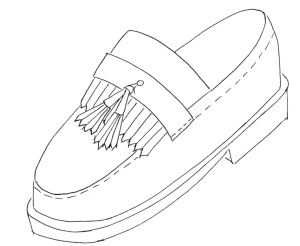 It was clear that he wasn’t going to get the plimsolls so the best he could do was make sure he didn’t get the tassels.  He chose the lace-ups.  Mum exhaled.

After Luke had tried them on and walked up and down on the carpet in them, and Mum had squeezed the toe ends of them to see how much growing room there was, the shop lady boxed them up.  But just as Mum was about to pay, Luke remembered something.  He’d heard a horrible rumour at school which he hoped wasn’t true but he had to be sure.  He’d heard Katia tell Susan that shoes are made of cow skin!  It was too shocking to contemplate and Luke had assumed Katia, who was always melodramatic, was making it up to get attention.  But could she have been telling the truth?

“What are they made of?” Luke asked the shop lady.

“Canvas!” Mum interrupted, “they’re made of the same material your plimsolls are made of but they’re sprayed with a special substance that makes them hard and shiny.”

Luke was surprised at his Mum for rudely interrupting someone who was already talking.  The times she’d told him off for doing that.  And the shop lady was obviously surprised at her too as she looked at her quite strangely.  But in a way Luke was glad to discover his Mum didn’t always do everything right.  It made her a bit more human.

So Luke had new shoes.  Mum said it would be a good idea to wear them around the house for an hour on the first day, then two hours the next, gradually increasing the time until they were comfortable enough to wear all day.

“Wouldn’t have had to do this with plimsolls,” thought Luke as he paced up and down his bedroom.

A week later he wore them to school.  He had to admit it was good timing because it had started to rain and it wasn’t pleasant being stuck in wet socks all day.  His new shoes kept his feet dry.  He would say that for them.  And he got a few compliments.  Joe said he liked them, and so did Eddie and Susan.  Miss Shaw said they were very smart, which undermined his confidence in them a little, but at least Mrs Tebbut hadn’t been impressed.  At lunch time Luke changed into his plimsolls for football on the playground – hard, shiny shoes just weren’t good for running in.  When the bell went he returned to the cloakroom to change back into his shiny shoes and found Simon Butler looking at them.  Luke scowled.

“Wouldn’t have thought you’d wear them ,” said Simon smugly, “that makes you a hypocrite.”

Luke had no idea what a hypocrite was but knew that if Simon Butler was calling him one, it wasn’t something nice.  He assumed he was making some derogatory remark about the shoes and decided he was glad that Butler didn’t like them.  He didn’t like the stupid stuff Butler wore either.

“If I’m a hypocrite so are you – that horrible jumper makes you the biggest hypocrite in the world for wearing it!” said Luke as he walked away, very satisfied with his comeback.

“You don’t know what hypocrite means do you?”

“It means someone who doesn’t practice what they preach.  You say you won’t eat animals because you don’t want them killed but you’re wearing cow skin on your feet!”

“Those are made of leather, it says so on the label.  Leather is cow skin!”

Luke trembled with indignation.  He knew Butler was lying because he’d seen the label inside his shoe. The word ‘leather’ was not on there.  They had an audience now, the whole class was gathering round, eager to see who would get the last word.  Luke would not let it be Butler.  He took off one of his shoes, looked inside it and then proudly held it up for everyone to see.

“I do not kill animals!  I do not pay for animals to be killed!  I do not eat animals and I do not wear animal skin!” he said with gravity.

“What is going on out here?” Mrs Tebbut entered the cloakroom in search of her missing class.

“Mrs Tebbut,” said Simon politely, “we were wondering what this means,” he pointed to the label inside Luke’s shoe. 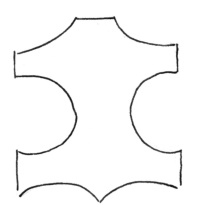 She smiled and told everyone to go and sit down.  She did like it when her pupils asked her about things unconnected with lessons.  It showed they had active minds.

Luke hung back.  He was furious.  Not only had he been humiliated by Simon Butler, but his own mother had lied to him.  He took off his other shoe and threw them both into the swing bin in the girls’ toilets.  Then he pulled out loads and loads of paper towels, screwed them up, soaked them under the tap and tossed them into the bin on top of the shoes.  He put his blue plimsolls back on his feet where they belonged and, somewhat calmer now, went to class.

When Mum met him from school at half past three he smiled and was friendly, pleased to be finished school for the day.  She was happy too.  The afternoon weather had really brightened up and lifted her spirits.  They waited for Jared and then walked home.  About half way, Mrs Walker noticed that Luke wasn’t wearing his new shoes.

“Where are your new shoes Luke?” she asked, apprehensively.

Luke looked into her questioning eyes and said,

“At lunch time I was jus’ sittin’ quietly on the grass pickin’ wild flowers and makin’ daisy chains for Mrs Tebbut, when suddenly a flock of big black crows flew at me an’ knocked me over!  Then they pecked at me shoes ’til they’d got ’em off me feet and then they grabbed ’em with their claws and carried ’em off into the trees.  I ‘spect they wanted to make nests in ’em.”

Mum stared at him.

“What has happened to your expensive new shoes Luke?  I want the truth!”

“Truth is very important isn’t it?” Luke said thoughtfully, “It’s bad to tell lies.  People who tell lies can’t ever be trusted.  They’re like the boy who cried wolf.  No one’ll ever believe a word they say again.”

Mum’s lips tightened, she looked straight ahead and they continued their walk in silence.  When they were nearly home she spoke.

“Luke, your feet have grown, you have to have new shoes.”

“Plimsolls are no good when it rains.”

“I’ll get wellies for when it rains.  Blue would be good.”

Mum looked at him.