Everyone was excited because it was Grandpa Wollemi’s Birthday.

Kauri had made him a lovely drawstring bag for holding his popcorn when he watched a movie.

Cedro would have loved to make him something like that but, though he had tried, …

… he just couldn’t get the hang of sewing.

Myrtle had made a mobile of a beautiful flock of origami birds for Grandpa to hang in his bedroom window.  Grandpa adored birds.

Cedro would have loved to make him something like that but, though he had tried, he just couldn’t get the hang of folding paper. 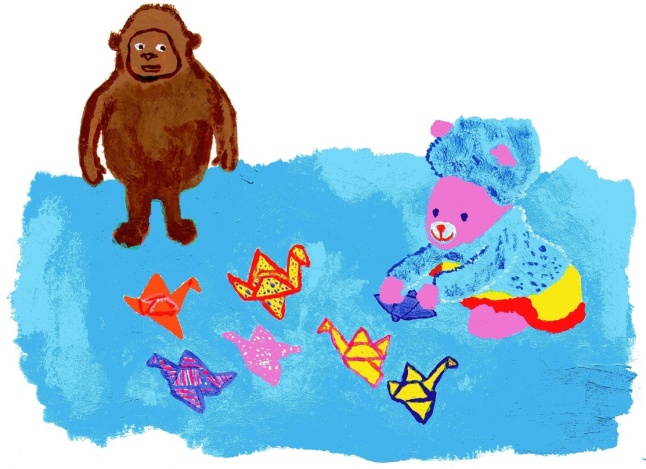 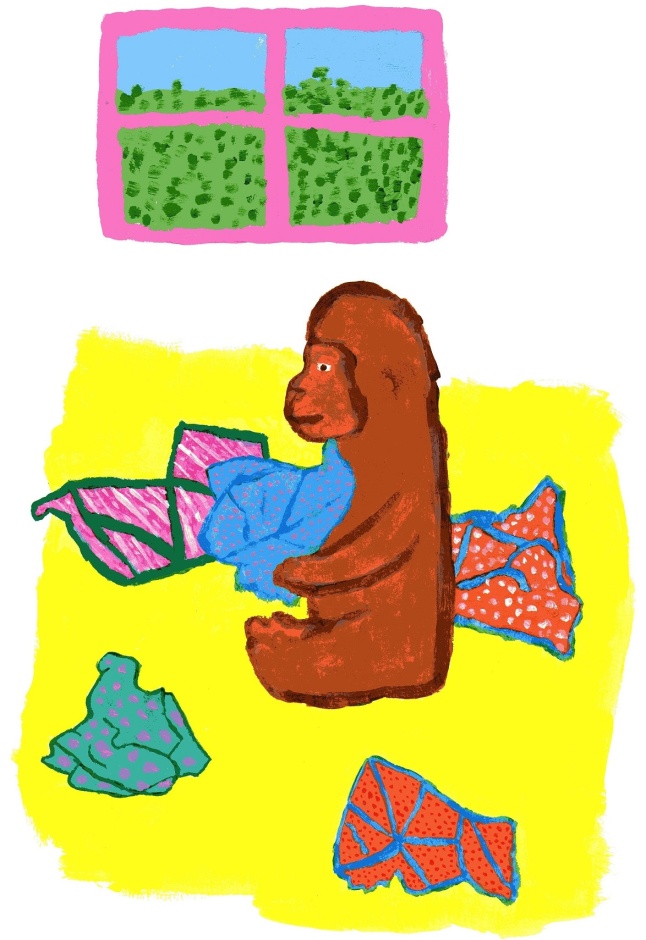 “What shall I give to Grandpa?” Cedro asked Kauri.

“It’s up to you,” said Kauri, unhelpfully, “think of something Grandpa likes.”

“What do you think he would like from me?” Cedro asked Myrtle.

“That’s not for me to say,” said Myrtle, unhelpfully, “what do you think?”

“He likes knitting,” Cedro thought, “maybe he’d like some yarn, or a new pattern.  But those things cost money.”

Cedro didn’t have any money.

“He likes gardening, maybe he’d like some new seeds.” 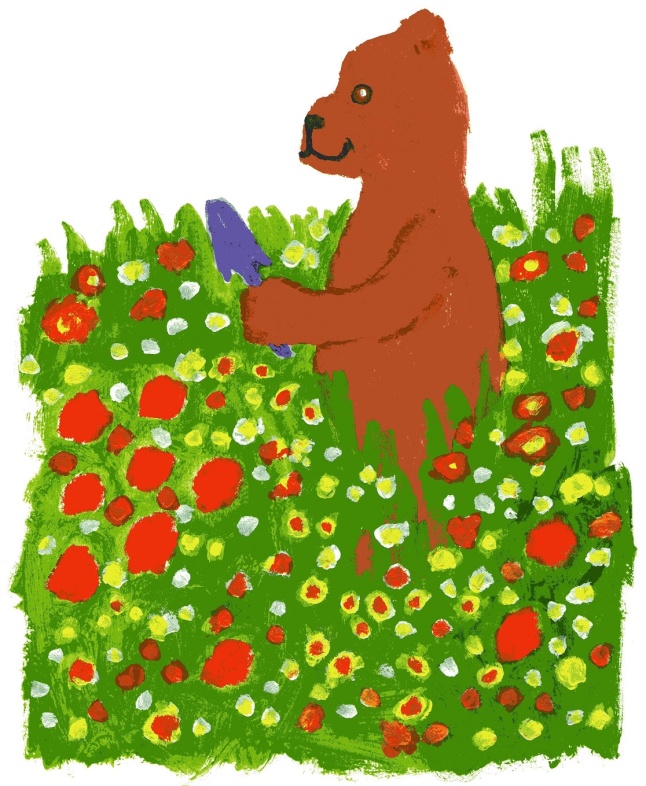 “He likes playing with his train set, maybe he’d like a new engine.”

While Cedro continued to ponder, Grandpa walked behind him, into the kitchen. 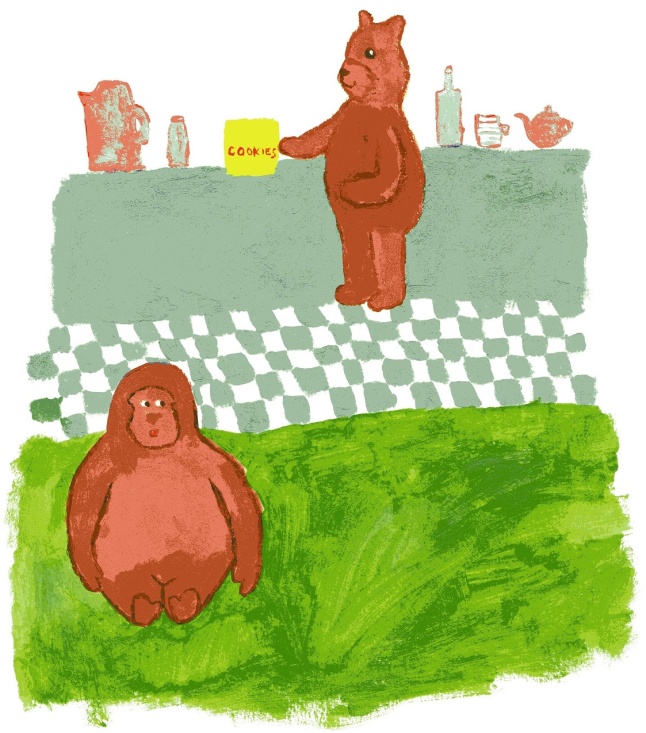 Grandpa picked up the biscuit tin, rattled it, put it back down and trudged back to the living room.

“That’s it!” thought Cedro, “Grandpa’s got a sweet tooth!  I’ll make him a birthday cake!”

Cedro washed his hands and gathered together all the ingredients he would need.  They were flour, baking powder, sugar, sunflower oil, water and vanilla essence.  Then he carefully switched on the oven and set it to 160° centigrade. 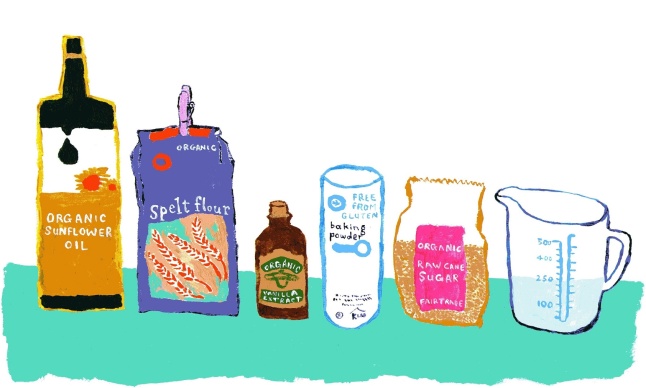 Then he took out the weighing scales, measured 12 ounces of flour and put it into the mixing bowl.

To the flour he added 4 slightly heaped teaspoons of baking powder.  And he mixed it in well. 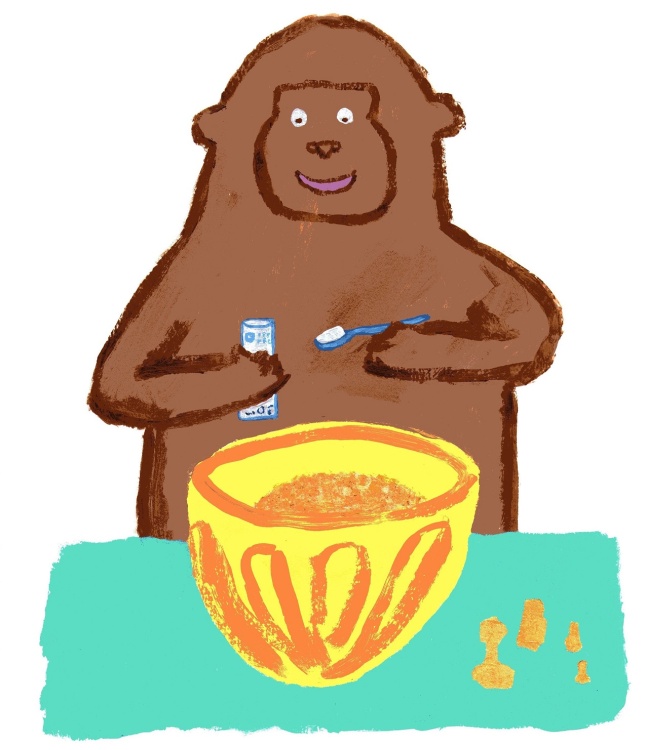 Next he weighed 6 ounces of sugar and mixed it in with the flour.  He stirred it a lot.

After that he added the wet ingredients together: 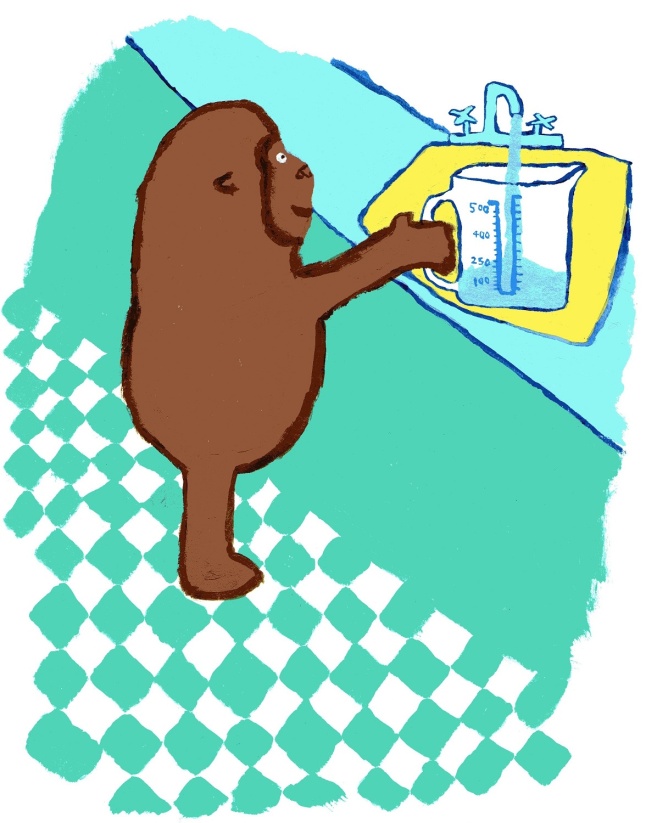 6 tablespoons of sunflower oil and 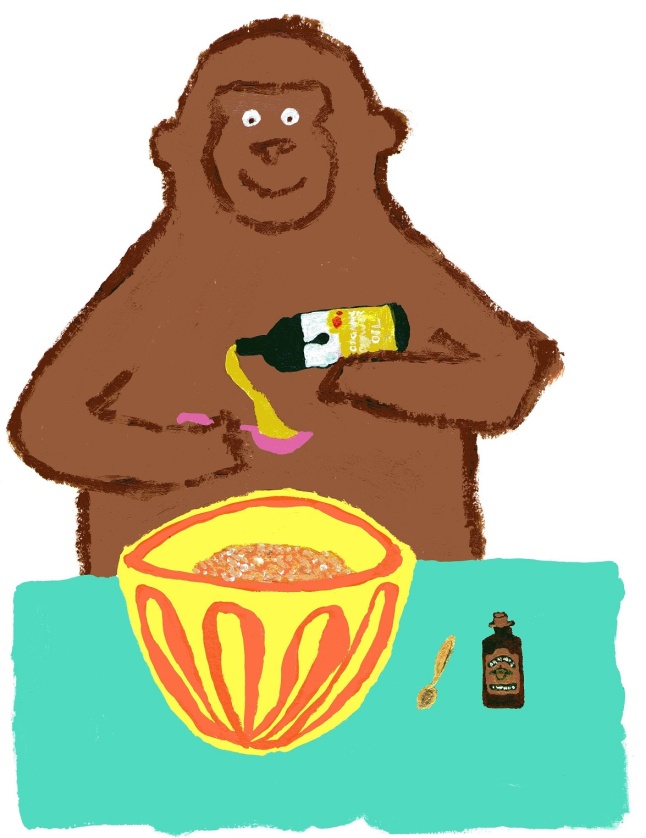 He poured the wet stuff into the dry stuff and mixed it up really well until he had a thick, moist, cake mixture. 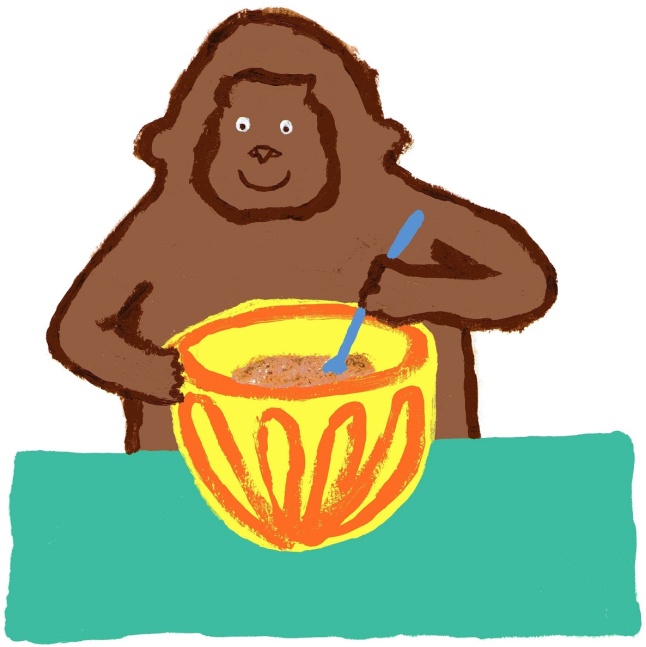 Then he lined a cake tin with eco-friendly grease-proof paper and poured the mixture into it. 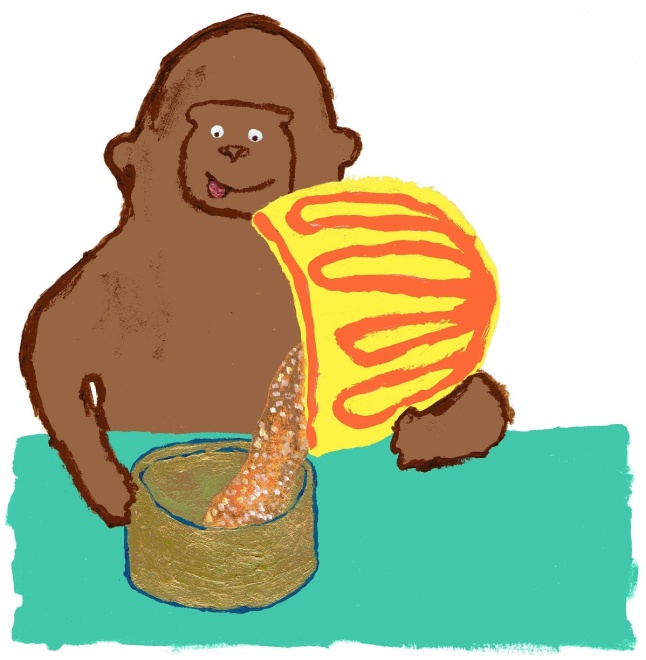 When he’d scraped all he could out of the bowl, Cedro put on his oven gloves and very carefully put the cake tin into the hot oven. 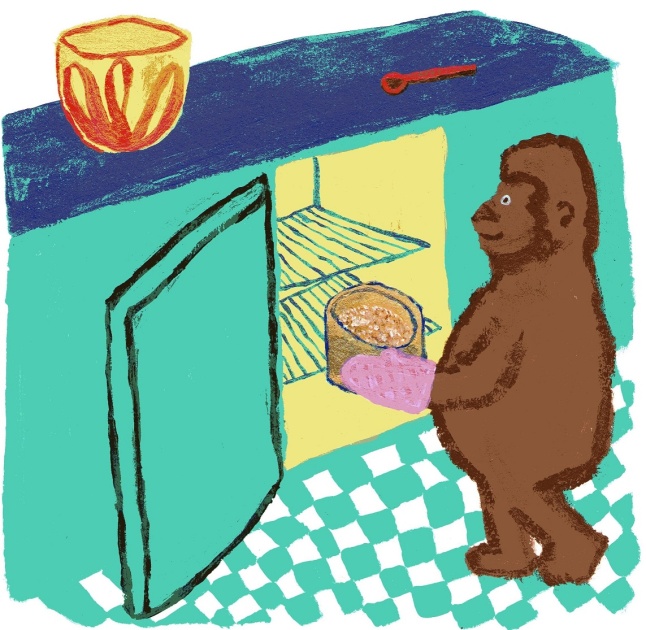 Cedro set the timer for 75 minutes (which was an hour and a quarter) and when the buzzer went off he put on his oven gloves and carefully removed the cake from the hot oven.  He took it out of the tin and put it on a wire rack to cool.

When it was cool, Cedro sliced it in half and spread jam in the middle to make a big jam sandwich cake. 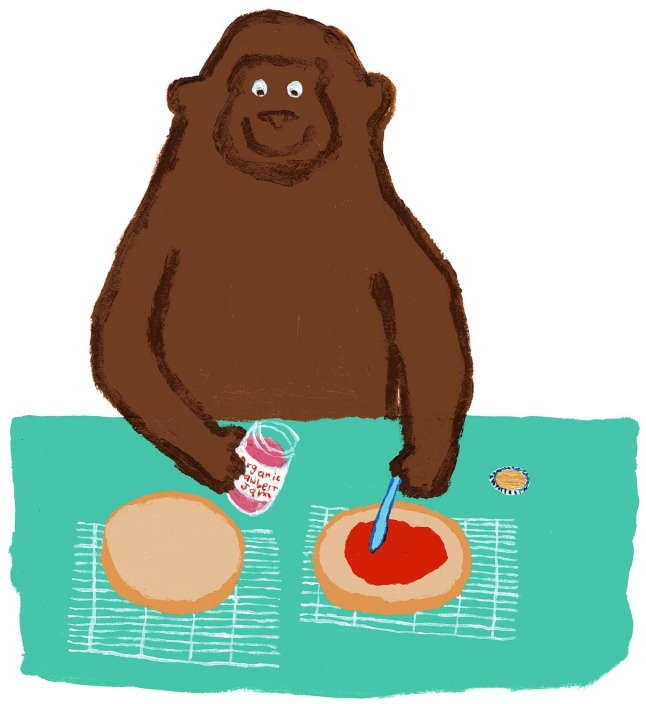 Next, Cedro weighed out 4 ounces of icing sugar and sieved it into a bowl.  To that he added about 3 teaspoons of water and 1 teaspoon of vanilla essence and stirred until the icing was thick and smooth.

He spread the icing on the cake.

Then he decorated it beautifully with deliciously sweet organic raisins.

By then it was time to get ready for Grandpa Wollemi’s Birthday tea.

Everyone was very excited. 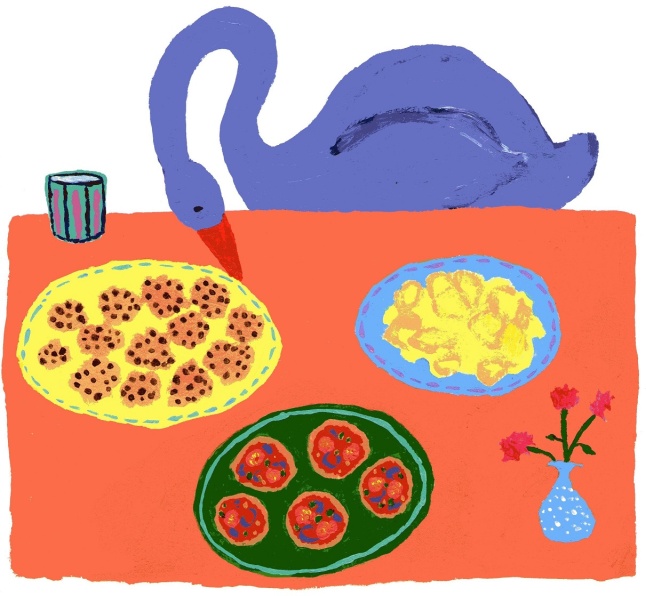 there were crackers and pasta salad and pineapple on sticks;

and the big birthday cake, made entirely by Cedro, was the centrepiece.

But before they sat down to tea, Kauri gave Grandpa his present.

“Happy Birthday Grandpa, I made this for you,” he said. 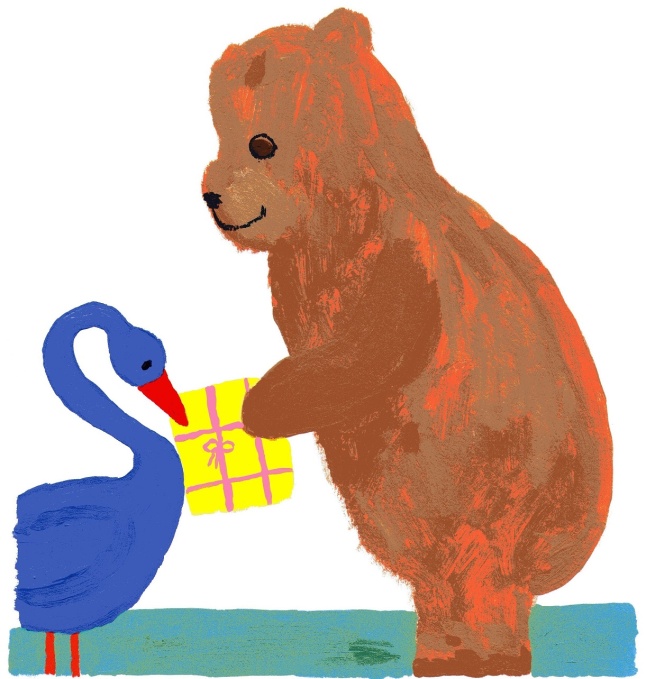 “Oh thank you Kauri,” said Grandpa when he’d unwrapped it, “I just love it!”

And Myrtle gave her present to Grandpa.

“Happy Birthday Grandpa,” she said, “I made this for you.”

“Oh thank you Myrtle,” said Grandpa when he’d unwrapped it, “I absolutely love it!”

And he was thrilled with the delicious birthday tea the children had made for him.  But Cedro was too excited to wait for everyone to finish the savouries before they got to his present … 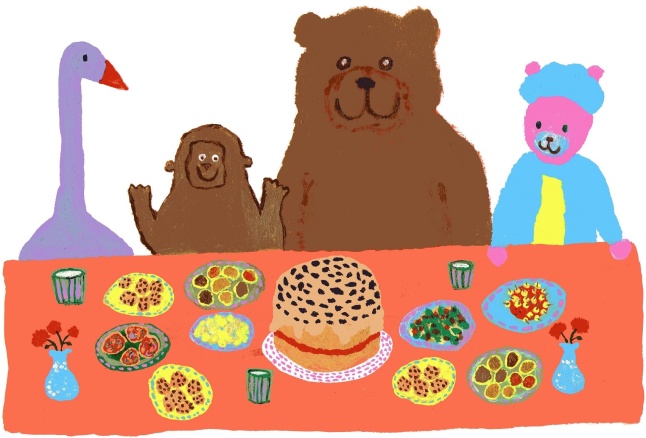 … so he cut a slice for Grandpa straight away and said

“Happy Birthday Grandpa, I made this for you.”

And with a great big smile Grandpa took it and said,

“Oh thank you Cedro, I really really love it.”

And he really REALLY did. 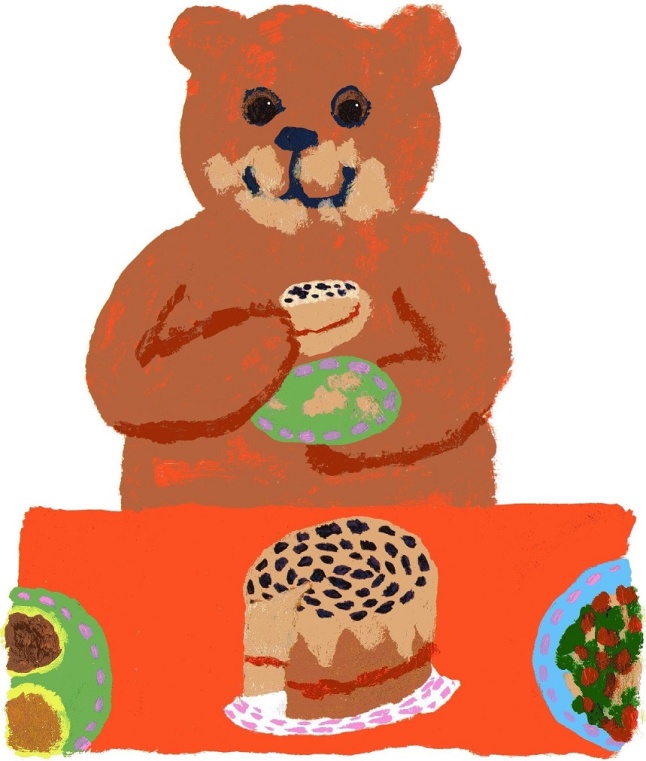 Grandpa Wollemi’s Birthday is available in paperback from our shop