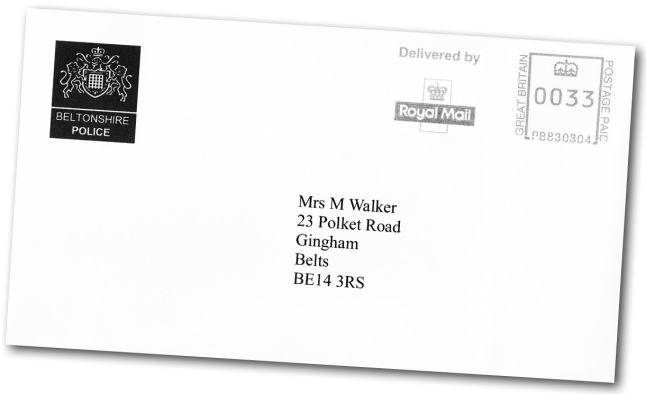 When the envelope dropped onto the mat it looked ominous.  Mum was nervous about opening it.  Why the police would be writing to her she couldn’t imagine.  Well, actually, she could imagine but she didn’t want to.  She reassured herself that it wasn’t to inform her that someone close to her had been in an accident, they wouldn’t do that by second class post.  So what could it be?  Jury duty?  No, that doesn’t come from the police.  The quickest way to find out, of course, would be to just open it, but before doing that she really wanted to think of something not horrible that it might be about.  Sadly, Luke’s mother found it impossible to do that.  She took a deep breath and ripped it open.

“Bio-dampers are workin’ at optium.  They can’t detect you.”

“Work fast.  Dampers are fluttuatin’, I don’t know how much longer I can keep you hidden.”

“Can’t get a lock.  The Borg shields are too thick.  Get to the cargo bay – I should be able to beam you out from there.”

“Jared!” Luke scowled at his brother.

Joe climbed down from the top bunk and picked up his doodle pad. “I’ll wait here.”

When he entered the kitchen Mum had her back to him but she knew he was there.

“I got a letter from the police,” she told him.

“About what?” asked Luke, trying to sound casual.  Mum turned to face him.

Luke rubbed his face and smeared the tattoo.  “It’s alright, it’ll come off.”

Dad stepped out of the pantry and suppressed a smile.  “Sit down please Luke, we need to talk to you.”

“The police seem to think I’ve been harassing the Maybury trustees,” said Mum.

Luke raised his eyebrows.  “Why would they think that?”

“I can’t imagine,” said Mum, “unless someone else has been writing letters and signing my name on them.”  She clearly thought it was him but it wasn’t.  He wouldn’t do that.  Why would he?  That would be a very stupid thing to do.  Anything that led back to her led back to him.  He never signed his letters and he certainly didn’t put a return address on them.  So how had the police got her name and address?  Was he being watched?  Was he under police surveillance?  What else did they know?  This was very troubling indeed.

There was, in fact, a very simple explanation.  For over two years the Secret Society of animal stick up for-ers had been writing to Maybury Centre for Animal Welfare, asking them to make their cafe vegan.  At first Luke wrote once a week, sometimes twice.  But when the Society realised the charity trustees were the decision-makers they decided to write directly to them.  There were six trustees so that meant writing six letters a week and stamps became prohibitively expensive.  But Luke wasn’t going to let a little thing like insufficient funds prevent him from doing something this important.  So, he continued to write and when he didn’t have enough money for the stamps he scavenged them from his mother’s purse.  He was sure she wouldn’t mind.  After all, it was Mum who suggested he write to them in the first place.  A couple of times, when there were no stamps to be found in her purse, he had hidden his letters in a pile on the kitchen counter.  Mum was quite a devoted correspondent herself.  She wrote to her friend Margaret in Wales; to Uncle Max and Auntie Beatrice who lived in Torquay; and to a couple of old school friends, Kath and Myrtle, who had moved to Stoke-on-Trent and Edinburgh respectively.  Sometimes there wasn’t much to tell them so she’d just write a brief note on a postcard but she always put whatever she was sending in a plain white envelope from the box in the sideboard.  Luke was getting all his envelopes from the same box so it was easy to slip his letters into her pile without her noticing and then she would put stamps on them at the post office by lifting the top right hand corner of each envelope just enough to add the stamp. He’d seen her do it. She never reviewed the names and addresses once she’d sealed the envelopes.  What Luke didn’t know was that she also put one of her return address labels on the top left hand corner of each envelope in the same way.

Mum was staring at him, waiting for an answer.

“Did you write offensive letters to these people?” asked Dad coldly.

“Nothing else?  You’re not threatening or abusive?”

“No!” said Luke, annoyed at the accusation.  “I jus’ tell ’em, like you said.  I tell ’em I don’t like ’em sellin’ meat an’ fish an’ everything that’s cruel to animals, and I tell ’em they should know better.  Stuff like that.”

Mum handed him the letter.  “So how do you explain this?” 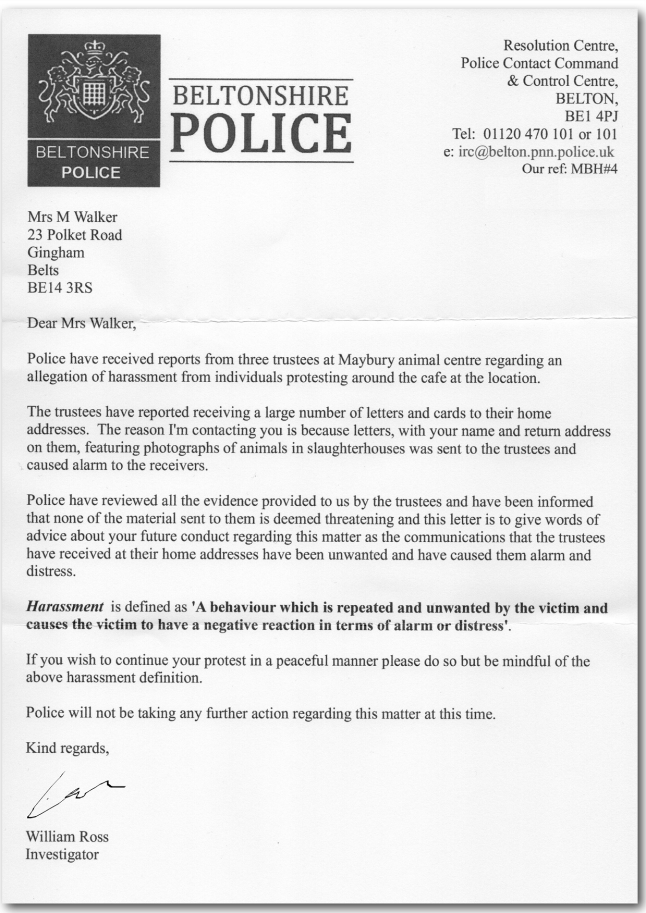 “Explain,” said Dad, “and the truth this time.  What did you send that caused alarm to the receivers?”

Luke explained.  “They’re s’posed to be lookin’ after animals, not killin’ em!  They’re pretendin’ it’s not cruel to kill ’em for meat so I found a picture on the internet of a bull bein’ killed in a slaughterhouse an’ I printed it out to show ’em how cruel it is.  To show ’em so they wun’t keep doin’ it!”

Mum and Dad looked at each other without saying anything.  Luke couldn’t tell whether they were still mad.  He was about to make another attempt at convincing them he was right when Dad spoke up.

“And you sent this to their homes?”  Luke nodded.  “Well of course they were upset! You shouldn’t be writing to people’s home addresses Luke, that’s out of order!  If you’ve got a problem with a company, you write to the company!”

“I did!  We did!  We wrote loadsa times to the sanctuary and they ignored us!  For months!  Then Tania’s mum said it was trustees who decided things at charities and they’re s’posed to run the charity for the reasons it was set up which is to prevent unnecessary sufferin’.  So Maybury’s payin’ for unnecessary sufferin’ – coz it’s not necessary for people to eat animals – instead of preventin’ it.  So Tania said they had no right to ignore us coz they should be countable for their actions and they’re breakin’ charity law so someone’s got to hold them to count for that!  So one of us found their addresses from, erm, a website and we started writin’ to them at home.”

“And did that make them answer you?”

“If you were hoping for a response you must have put our address on your letters,” said Mum.

Dad took a deep breath.  “These are good people Luke, they donate their time and their expertise to help an animal sanctuary.  You’ve made your feelings clear and they’ve heard you.  There’s nothing more you can do.  You can’t force them to change.  Sending them grisly pictures of slaughtered animals is going too far.  No wonder they were upset.”

Luke was incensed.  “They’re upset?!  They’re the ones who did it!  D’you think I liked lookin’ at that picture?  No – I didn’t.  Nobody wants to look at that, but people who pay for it to happen have no right to complain!”

“No, he’s right,”  interrupted Mum.  “It’s these people’s responsibility to run the charity by the principles it was started on.  And if they go astray they have to be answerable.  They should have answered the children’s very reasonable request in the first place.  Ignoring them left the children with no other recourse than to write to them at home.  They brought it on themselves.”

Luke was relieved that he’d finally got through to somebody.  He nodded and looked at Dad who was harder to read.

“But you mustn’t be abusive in these letters,”  Mum added.

“Or threatening, or use any foul language.”

Perceiving that the inquest was over, Luke left the room.

“Weird though,” Mrs Walker commented, “how did the police get our address?  That creeps me out.”

Her husband shrugged. “I’m sure there’s a reasonable explanation.”

Luke opened his bedroom door and grinned at his friend.

“We’ve had a reply from Maybury!” 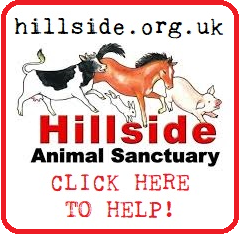