The conclusion of Chapter Ten:

For dinner his mum had cooked lamb chops.  After getting to know Curly and Squirt, Joe couldn’t bring himself to actually bite into one but when no one was looking he cut a piece off and hid it in his pocket. Then he shoved some mashed potato in his mouth.  After swallowing, he started making retching noises.

“Joe!  Do you have to make that revolting noise?” his mum asked with disgust, “what’s the matter?”

Joe jumped up from the table and ran to the toilet.  Mrs Currant was close behind so he had to be quick. He tipped the pre-opened tin of lentil hotpot, that he’d hidden behind the toilet, into the bowl and then leaned over it and made vomiting noises.  Mrs Currant caught up.

Joe looked up at her.

“No,” he said pathetically, “I think I’m allergic to meat.”  He bit his lip as he remembered Luke had told him not to tell her he was allergic, but to let her work it out for herself.

Mrs Currant looked in the toilet, saw the orange slop and thought with revulsion how different a person’s food looked when it came back up from how it looked when it went down, only moments before.  She looked at her son, he did look pale.

“Okay, you go and lay down.  I’ll bring you a glass of water and a bucket.”

“So far so good,” thought Joe and went to bed, hungry.

In the morning, he was even hungrier but knew he had to ditch one more meal.  As it was Saturday, breakfast consisted not only of cereal, but also fried eggs on toast.  First the cereal – Joe tipped the choco pops into his bowl and covered them with cows’ milk.  He put a spoonful into his mouth and immediately spat it back and grabbed his throat.  He gasped.

“I can’t breathe!” he whispered desperately as he bent his head to his knees and reached in his pyjama pocket for Luke’s mum’s blue eyeshadow.  He rubbed his fingertip into the colour and smeared it across his lips before lifting up his head to reveal it to …. no one.  The room was empty.  His dad had taken his plate into the living room to watch the news and his mum had gone to get the paper from the front door. Joe continued to hold his breath, hoping his mum would return before he was forced to exhale.  Just then the kitchen door opened and his older sister, Janet, walked in.

“That better not be my eyeshadow,” she warned him.

“It’s not,” he assured her, forgetting not to breathe just as Mrs Currant re-entered the kitchen.

“Mum, Joe’s messing up my eyeshadow.”

Mrs Currant looked at Joe then screwed up her face and shook her head.

“That’s not yours.  Yours is more turquoise,” she said and sat at the table to read the paper.

Part two was a bust.  Joe loaded his plate with eggs from the pan and toast from the rack before stealing himself to proceed with part three of the plan.  He sat down and reached into his other pyjama pocket to get the stinging nettles hidden there.  While his mum read her horoscope and Janet searched the fridge for jam, Joe quickly and bravely rubbed the nettles on his forearms and neck before hiding them again in his pocket.  The pain was immediate.  It stung a lot.

He chopped and mashed one of his eggs with his fork to make it look as if he’d eaten some of it.  Then, as he noticed the white bumps starting to appear on his arms he said,

“Mum! Mum!” and rubbed his arms and neck furiously with the palms of both hands.

Mother and daughter both looked at him.

“How on earth did you get stung in here?” Janet said in high-pitched disbelief.

“Stop rubbing it like that, silly boy!”  Mrs Currant grabbed a tea towel from the drawer and ran it under the cold tap.  “Here, put this over the bumps, keep them cool ’til they go down.  And maybe have a look in the garden for a dock leaf to rub on it.”

“Honestly Joe,” said his mum, shaking her head and returning to the horoscopes, “only you could get stung at the breakfast table.”

Joe had had enough.  His skin was burning and itching and stinging – he was in real pain and they still didn’t listen.

“I’M A VEGETARIAN!” he shouted.

“Joseph Currant!  How dare you raise your voice to me?!” said Mrs Currant, shocked by his impertinence.

“Keep the noise down in there!  I’m trying to watch the news!”  Mr Currant yelled from the living room.

“And now you’ve upset your father,” his mother went on.

Joe looked at his hands.

“I don’t want to eat meat no more,” he said quietly, “or eggs or fish or milk, or cheese,” he finished, getting quieter with every word.

“Oh, I get it,” Joe’s mum said, knowingly, “you want to be like your little friend don’t you?” she peered at him over the newspaper. “You don’t have to copy everything he does you know.”

“I know what it’s like, it’s not that long since I was at school myself you know.  Of course I was vegetarian, long before it was fashionable,” she boasted.

“Why’d you stop then?” Joe wondered.

“But then I married your father and you can’t imagine him giving up his sausages and his bacon can you? Ha! I’d like to see the woman who could pull that off!”

“Talking of which, I bet you haven’t thought this through, – if you do this you won’t be able to have fish fingers any more.”

“You can get special ice cream and …”

“Oh my boy, you don’t know what you’re letting yourself in for!”

Joe looked at her, holding his breath.

“I know what you’re letting yourself in for – been there, done that!”

She studied him through squinting eyes.  Joe said nothing.  She seemed to be considering it.  After a couple of minutes she made a decision.

“Well, alright.  But I’m not making special meals just for you.  You can have whatever we’re having with some extra vegetables instead of the meat.  Is that acceptable Your Highness?”

Joe looked up and smiled.

His mum returned the smile and ruffled his hair.

Joe pressed the damp tea towel against his throbbing skin and smiled.  Janet scrunched up her nose and stuck out her tongue at him.

“I give it a month!” she whispered.

More Luke Walker: animal stick up for-er (chapters 9 to 16) is available in paperback now from Amazon 😀 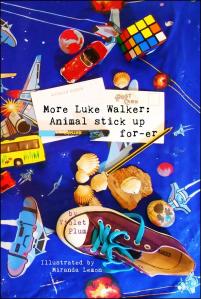 9 thoughts on “The lentil hotpot gambit and other clever tricks”