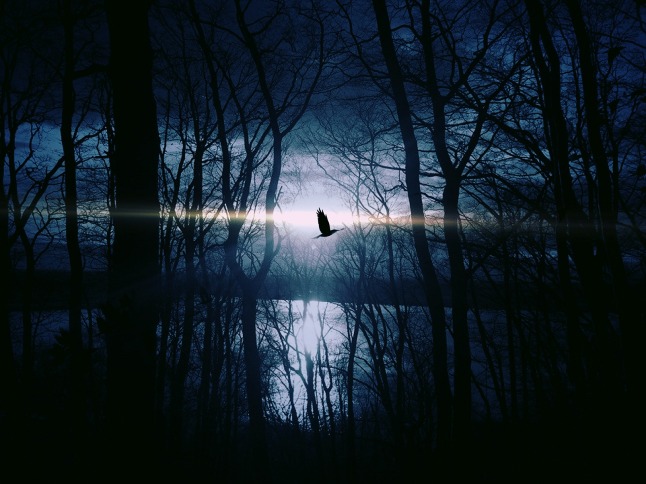 Gil Thompson shut down his computer, put his notepad and pens in his desk drawer and took his empty coffee cup to the dishwasher.

“See you Monday Terri,” he said to his colleague as he picked up his briefcase and headed for the door.

Teresa was engrossed in her work and took a moment to respond.

“Oh, yes, see you then,” she called after him, “wish Sally good luck from me,” she remembered to add.

Sally Thompson, Gil’s ten year old daughter, was playing the lead in her school’s production of Calamity Jane. Tonight was opening night and Gil had only an hour and a half to get home, eat dinner and get showered and changed before he drove the whole family to the performance.

It was already dark and raining hard when he pulled out of the multi-storey.  The traffic was bumper to bumper and every light turned red as he approached it.  It took him nearly twenty minutes to get out of the city centre so once he was on the open road he put his foot down.  Visibility was bad.  He knew he should slow down but his wife would be livid if he was late.  With wipers going full pelt and main beams on, he tore down the country lanes towards home.

He heard a gunshot.  And another one.  He wasn’t alarmed because he knew what they were.  The badger cull had started again.  It was a shame but unless the country wanted to give up on dairy farming, it had to be done.  He had issued another seven licences that day.  It was vital that the spread of bovine TB was stopped.  It was so upsetting for farmers when their herds got sick and had to be slaughtered.  Plus, it was costing the tax payers a fortune.  Ok, dairy farming was costing the tax payers a fortune anyway, but at least they were getting cheap milk out of it.  He shook his head.  He was the one who signed the forms but he didn’t like it, and he didn’t want to listen to it.  He switched on the radio to mask the sound of the guns.  The weather forecast warned that it might rain later and then one of his favourite songs began to play.  His furrowed brow relaxed and he absent-mindedly started to sing along.

Suddenly something rushed out into the road in front of him and he slammed on his brakes.  The car had been going too fast for a quick stop on the wet road and it hit something.  Filled with dread, Gil put on the handbrake and got out to have a look. At the side of the road lay a badger. Her left ear was bloody and heart-shaped.  It looked like a gunshot had taken a piece out of it.  He’d hit her with his car as she ran from the guns. How awful.  He looked closer and saw that she was still breathing.  As he leaned over her she opened her eyes and recoiled in fear.

There was no way to tell how bad her injuries were and he couldn’t bear to think of her suffering.  He would take her to the vet.  They might have to put her to sleep but at least it would be humane.

The badger, however, had no intention of letting him near her.  With great effort she got to her feet and limped towards the hedge.  She squeezed through it to the field and was out of sight.  Gil felt responsible.  He’d been driving too fast.  He switched off his headlights, turned on his hazards and locked the car.  He climbed over the gate and looked around.  Under the full moon he could see a dark shape limping sluggishly across the field and walked towards it.  There was another one ahead of it, and another one. Six, seven, …. there were eight dark shapes moving across the field.  Which was the injured one?  He fumbled in his pocket for the miniature torch on his keyring and shined it over the dark shapes, crouching to look for the bloody, heart-shaped ear.  But they were gone.  There was not one dark shape; not one fleeing animal; not one injured badger.

Then a deafening boom shook the sky and Gil hit the ground hard.  He heard voices approaching.

“Got another one! Bring the cage!”

“I thought it was a badger! I saw the glint in it’s eyes, close to the ground. I aimed for the glint!”

As he breathed his last breath, Gil saw the cage of dead badgers.  Just visible, sticking out from under the pile of bodies, was the soft, black and white head of the first kill, two hours earlier.  She had a blood-soaked, heart-shaped ear.

49 thoughts on “A Story for Halloween”