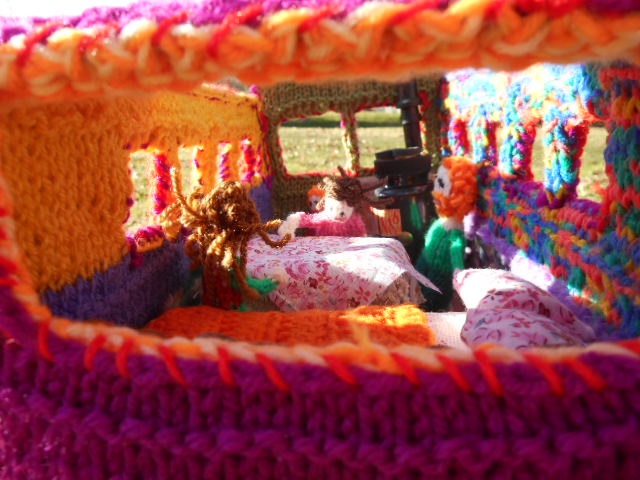 Miranda knitted Aiden and Cara and Casey and Brietta, and it didn’t take her long.

She got the pattern from loveknitting.com where it is free to download.  It’s a Goldilocks finger puppet by Amanda Berry which, at 7cm tall, is just the right size but, since we didn’t want finger puppets, Miranda stuffed the skirt, and sewed up the middle of it to make trousers for the boys, adjusted their heights and gave them the appropriate hair etc (including a beard for Aiden) and there you have it – The English Family Anderson, all ready to live happily ever after in their bus 😀 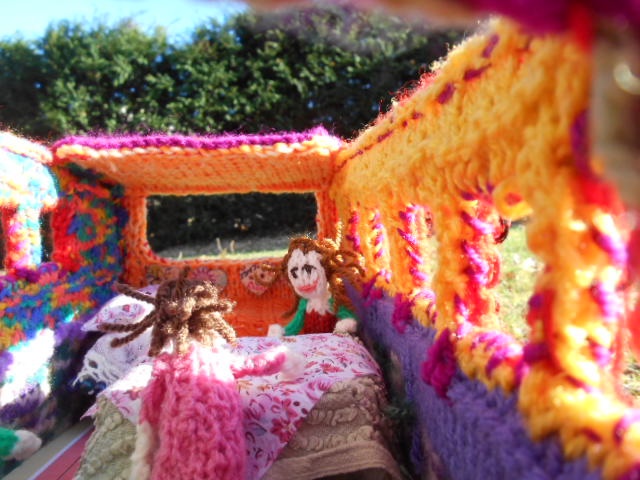 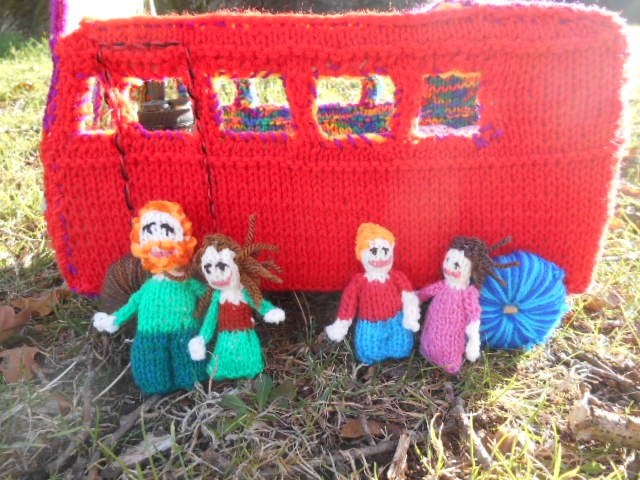 If you look back at Part 3 of the bus-making process you will see how I started work on the wheels and the floor.  This is how I finished them:

It turned out after all that the toothbrushes weren’t quite long enough to use as a single axle between two wheels so I used four – one for each wheel. 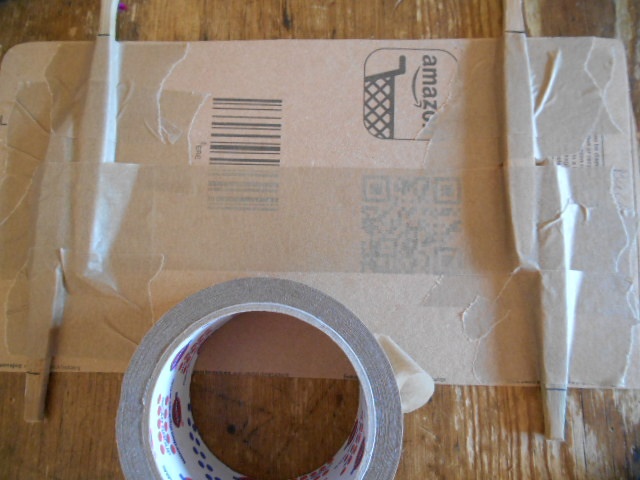 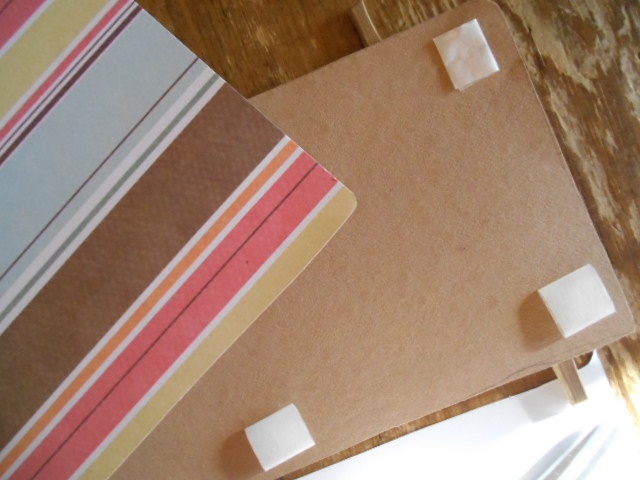 The paper I used wasn’t quite long enough to cover the very back of the bus floor (see above), but since I knew the bed was going to cover the back I decided it didn’t matter. 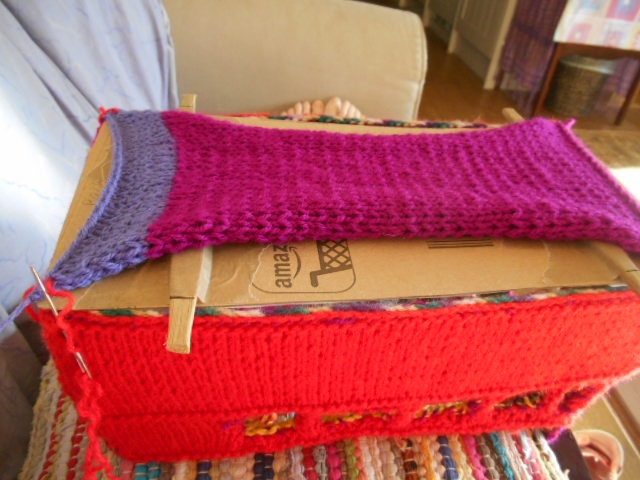 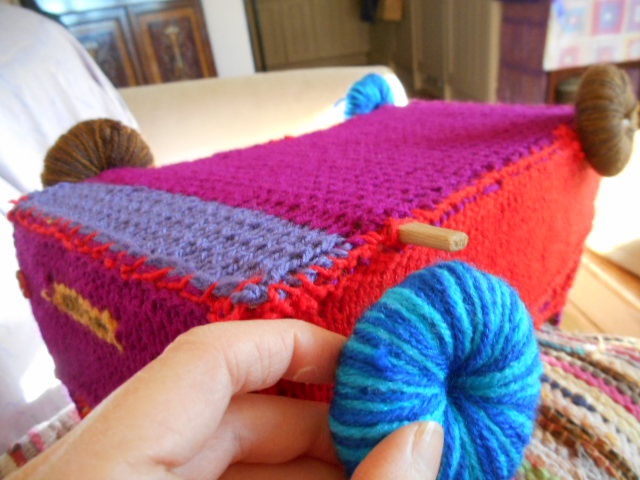 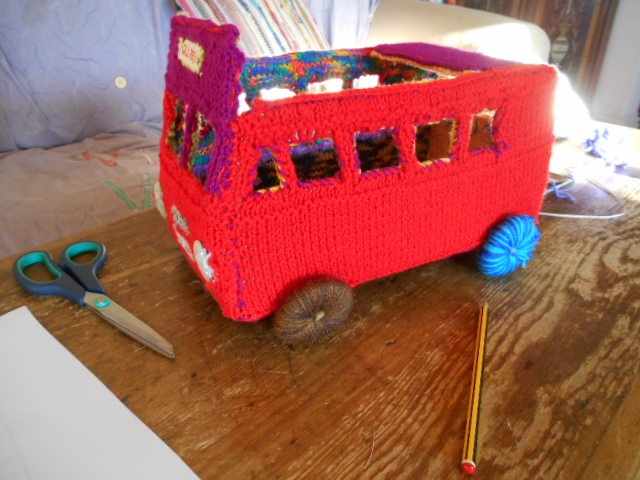 And there you have it! 😀 Be gentle, those wheels will come off quite easily.  And of course, if you’ve used toothbrushes like me, they won’t go round.  But they will look nice and, after all, Old Red has retired now so she just wants to sit still 🙂

And there’s a nice new floor! 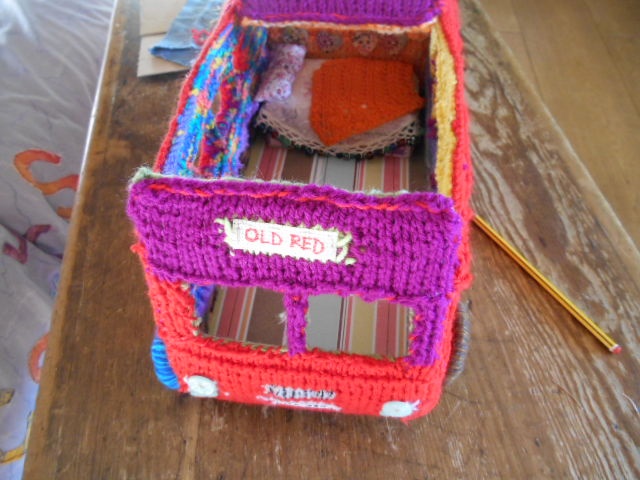 That’s it for now.  Today I’m going to make a wood-burning stove out of this pill bottle ↓ I’ll tell you about it tomorrow 😀

It’s perhaps not as cool as a sports injury but, when you’re too excited to pace yourself, a repetitive strain injury is just as inconvenient.  I have been knitting for several hours a day for about two weeks with no ill effects but after making the bus’s wheels I had such bad shoulder pain that I had to take a break.  It seems feeble because all I was doing was winding yarn around a cardboard circle, over and over – it’s not what you would call hard work.  But there it is.  I’ve been stopped in my tracks 🙂

This is what I’ve got so far:

I decided to make the bus wheels by cutting out cardboard circles which are a little bit smaller than the required (guessed) bus wheel size, cutting a smaller circle out of the middle of them, and winding yarn around them like you would if you were making pompoms.  Unlike when you’re making pompoms, you only need one cardboard circle per wheel, and you stop winding just before you get to the centre, leaving a tiny hole in the middle for the axle.

The axles are going to be old toothbrushes which just happen to be a little bit wider than the bus.

When I’d finished the wheels I needed a floor to attach them to.  I’m no longer following the pattern so this is an experiment which I hope will work.  I’m winging it.

I drew around the bottom of the bus on cardboard and cut it out.

Then I cast on enough stitches to cover about two thirds (or nearly three quarters) the width of the bus floor.  I haven’t proved this works yet, but the knitting will naturally get wider than the cast-on row and I want the finished piece to be slightly smaller than the cardboard so that it has to be stretched taut to cover it.  It remains to be seen whether I cast on the right amount of stitches to make it work.

Ok, on Wednesday I got as far as sandwiching the stiff card between the inside and outside of the two long sides of the bus, so on Thursday I did the same with the front and back ends: 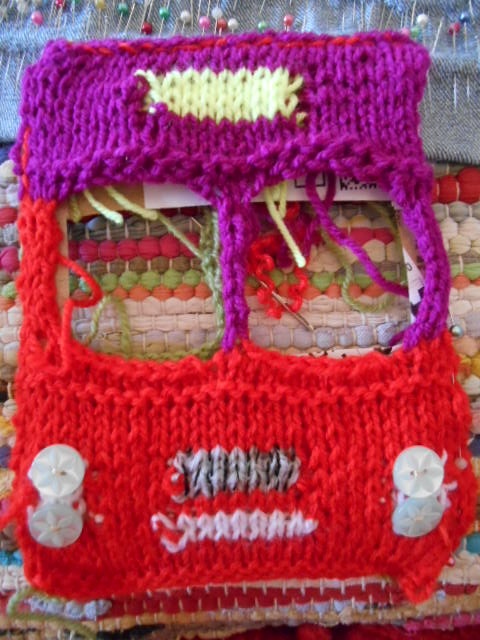 As with the long sides of the bus yesterday, I drew around the knitted pieces on stiff card (tidy up the lines with a ruler) and cut out the insert.  If you find, as I did, that your inside and outside pieces are not exactly the same size (due to one being made with slightly thicker yarn), then draw round the bigger piece and stretch the smaller one to match. 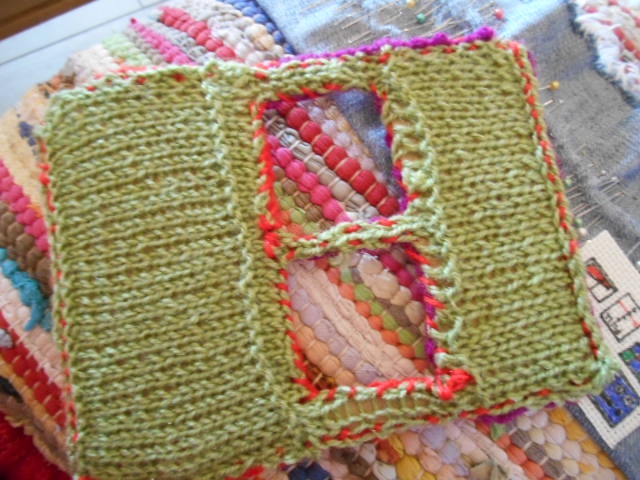 The green inside piece (above) came up smaller than the outside front of bus so I stretched it to cover the card as you can see.  It’s a fiddly business.  I found the best way to make sure your cardboard is the right shape and size is to sew together (wrong sides facing) two adjacent edges of the knitted pieces before inserting the card.  Then slot the card into the corner you’ve sewn and stretch the knitting to meet at the opposite sides and pin them.  If you find when you try to do this that the card’s just too big, or your window is too small, for the pieces to be sewn together around it, then you can pencil in the correct lines, unpin it, trim it and try again.  Eventually you’ll get it all sewn nice and tight.

The front of the bus needed some finishing touches so … 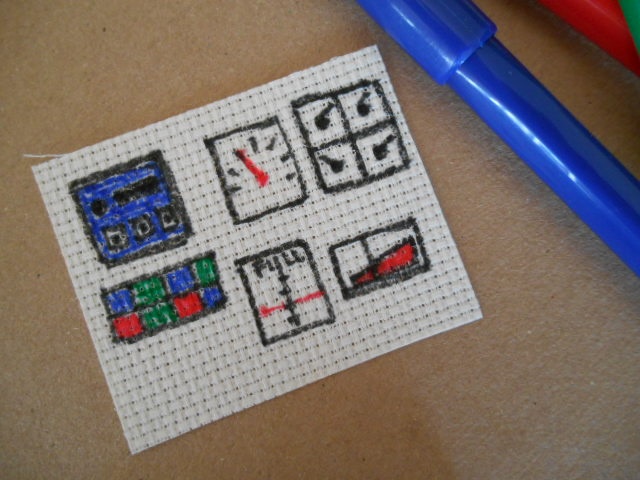 … I drew some buttons and dials onto some of that gridded material they use for cross stitch which I happened to have some of (it’s amazing the stuff people donate to charity shops – Miranda picks up loads of discarded craft items from the Raystede Charity Shop where she volunteers). 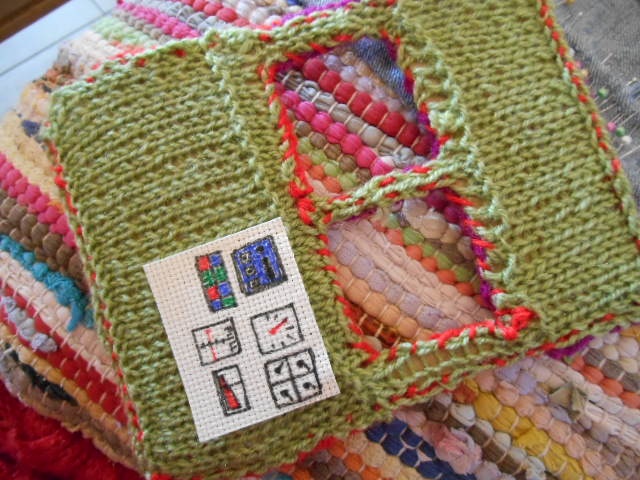 Then I sewed it inside the front of the bus.

I did the same for the ‘Old Red’ sign and the number plate.  After that I put together the back end of the bus. 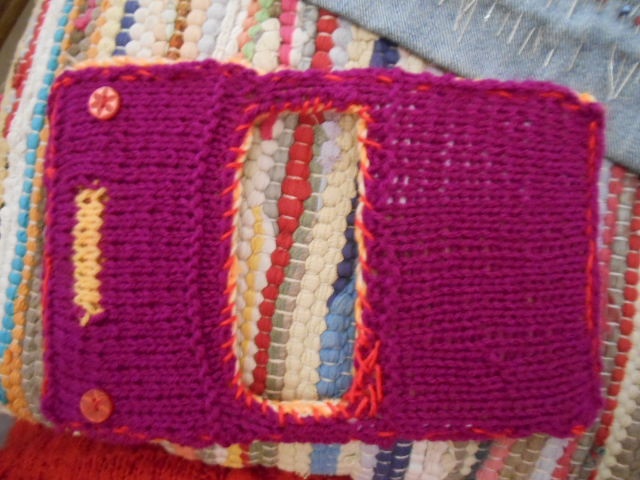 You will notice that the back has more height above the window than the front.  That’s because when it’s put together it folds over to make a partial roof.  You’ll see what I mean when I put it together.

I thought these pretty, heart-shaped, wooden buttons would look nice under the window in Mr and Mrs Anderson’s bedroom 🙂 (If you read episode 3 of The English Family Anderson you will see what their bus interior looks like.  The back end is a little bedroom for Mr & Mrs)

I had knitted the back number plate in the appropriate golden yellow colour so I didn’t want to cover it with a white or cream number plate (cross stitch material).  So this time I just wrote the registration directly onto the knitting with a black felt-tip.  You can’t read it but I think it looks like letters and numbers in the distance which are out of focus so I’m happy with it 🙂

All four sides done.  Now it was time to put the bus together. 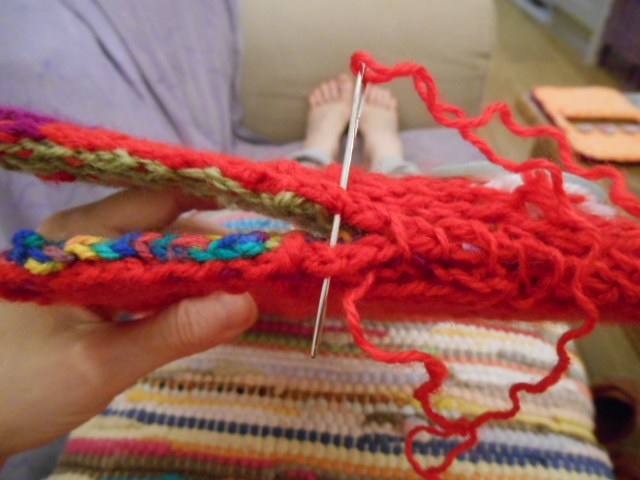 I began sewing with two adjacent pieces lined up together as above (NB – Miranda found some more bright red yarn after I’d finished knitting!).  Then, when I was over half way up …

… I was able to stand the pieces up in their correct position, enabling me make the front piece follow the curve of the side piece.  Again, don’t worry about neat stitching.  Imperfections have their own charm and, don’t forget, this is an old bus which has probably been patched up plenty of times so it wouldn’t be authentic if it looked pristine 🙂

One at a time I sewed together all sides of Old Red.  You can see below how the back piece folds over, above the window, and is sewn to the top of the back of the sides, making a partial roof.  In the pattern from which this is adapted, the front also folds over but I wanted to keep my front upright because it has the bus name above the window.  Plus I wanted there to be a bit more light in, and easier access to, the inside.  I forgot to mention yesterday that I also slightly altered the pattern for the front of the bus to make the windows slightly bigger by making the vertical strut in the middle narrower (only 2 stitches wide instead of 4) so that it looked more like the front of Old Red in my illustrations. 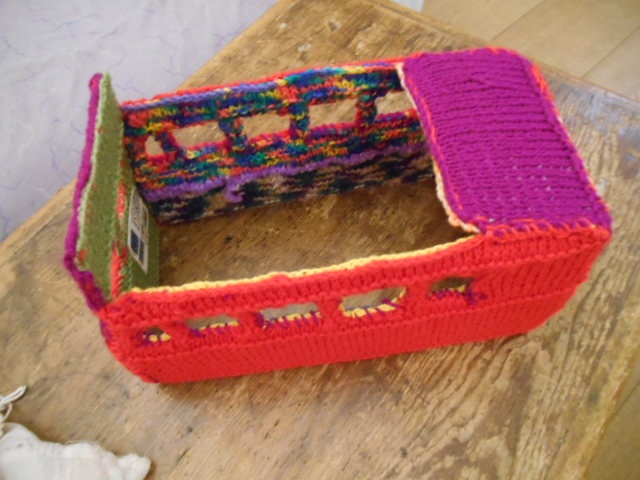 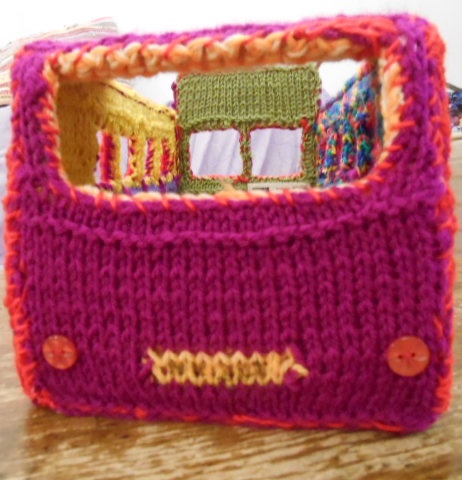 Look – you can peek inside 🙂

Our Old Red is approximately 30cm x 15cm x 15cm, not including the name sticking up on the front.

So I’d better get on with that then 😉