It was Saturday morning – finally!  No school; no getting up early; bliss!

Marcus’s mother called from downstairs, “Marcus!  Time to get up!”  Marcus didn’t move.  She tried again.  “Marcus!  It’s nearly half past nine!  We’ve got a lot to do today!  Get up!”

“Grrrr …. I wish I could stay in bed,” Marcus mumbled to himself.

Slowly, reluctantly, Marcus hauled himself out of bed and reached for his trousers.

“And take a shower!” his mother added.

“Grrr…” he said as he headed for the bathroom, “I wish I didn’t have to get washed!”

Eventually Marcus arrived in the kitchen.

“Eat your porridge,” said his mother.

“Grrr,” thought Marcus, “I wish I could have Sugar Choc Cookie Pops for breakfast.”

Marcus ate his porridge quickly to get it over with, slipped his feet into his trainers without undoing the laces – it was easy now that the heels were folded down in that convenient way – and opened the back door.

“Where are you going?” his mother asked, and without waiting for an answer, told him “I need your help at the allotment.”

Marcus sagged,  looked at the blue sky and grumbled, “Grrr, I wish I could go to the park.”

But Marcus did as he was told.  His mother carried the big fork and the trug, and he pushed the wheelbarrow piled high with home made compost.  They walked past the greyhound stadium to the High Street and held their noses as they walked past the butchers. 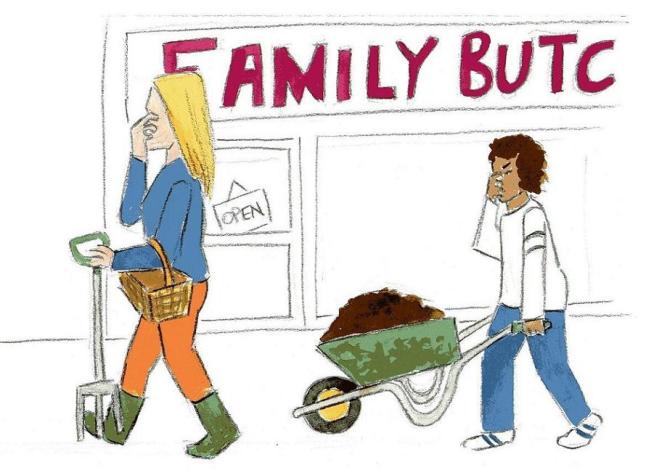 They reached the park  and Marcus, fed up, trudged along with the wheelbarrow which was getting heavier with every step.  He could see his friends playing football and wished he could join them.  He hoped they didn’t see him, stuck with his mum, going to the boring allotment.  His mother was way ahead of him now but he didn’t want to draw attention to himself by trying to run along the main path with his cumbersome load so he slunk stealthily between the shrubs and trees.

“Marcus!  What on Earth are you doing?” his mother shouted at a cringingly high volume, “Hurry up!”

The other boys turned and saw Marcus awkwardly trying to stop a wheelbarrow of muck from tipping over as he stepped back on to the main path.  They laughed.

“Grrr,” Marcus muttered through gritted teeth, “I wish my mum wasn’t so embarrassing.”

On the other side of the park they followed the public footpath past the cow pasture and the muddy paddock with the lone horse.  Marcus’s mum’s plot was right on the far side of the allotments, next to the field of limping sheep.  When he reached it she was already picking runner beans.  He put down the wheelbarrow and rubbed his aching arms.

“Thanks love,”  she said, “could you pull up some carrots please?”

“Grrr,” he thought, “I wish we didn’t have an allotment!”  But he crouched down and started pulling carrots.  It was easy work really.

One, two, three, four, five, six, sev … Hang on a minute.  Get a better grip.  Sev…  No.  Number seven wasn’t budging.  “Must be a big one,” he thought, and reached for the watering can to soften the earth.  While the water soaked into the ground his mind wandered, taking in the scenery, musing on his day so far.  Then he grabbed hold of the carrot greens again and tugged with all his might.  Nothing.  He wiggled it and yanked it from side to side.  Oh, now it was loosening.  With new determination and one mighty effort, he leaned right back and pulled.  And landed heavily on a big, green cabbage.

Disgruntled and ready to give up he rubbed his bottom.  “I wish we could just buy carrots!” he complained.

“Careful.  Don’t waste them,” said a small voice.  Marcus looked around.  Who said that? he wondered.  It certainly wasn’t Mum, a small voice like that.  But there was no one else around.

“I’m right here,” the voice came again, “on the ground, by the stuck carrot.”

Marcus could hardly believe his eyes.  Or his ears.  A sparrow was talking to him.  He looked around again to check no one was watching and then he leaned towards the little brown bird and asked, “What did you say?”

“I said don’t waste them.  Wishes.  They’re rare.  You’ll feel awful if you waste one.”

“Today, the moment that enchanted, rainbow-coloured carrot emerges from the soil, one wish will be granted to the person who pulled it out.  One moment.  One opportunity.  One wish.  Don’t waste it.”

Marcus was stunned.  Could it be true?  No, surely not.  Then again, he hadn’t thought it was possible to have a conversation with a sparrow until now either.  And what if it was true?  One wish.  Just one.  How could he possibly think of just one thing?  He wanted a new bike.  He wanted to go skiing.  He wanted to be picked for the football team.  But which did he want more?  Or maybe those ideas would be a waste.  Maybe he should get himself a super power, or make himself rich.

The sparrow cleared her throat to get his attention, “This magic is time-sensitive.  The carrot is ready now, just one more gentle tug and it will be out.  Wait too long and its enchantment will be lost; it will become just like the others.”

Marcus took a deep breath and reached once more for the carrot greens.  As he did he saw a rainbow spectrum of colour glowing under the soil.  He held his breath and looked into the middle distance for inspiration, racking his brain for the best thing to wish for.  He had to be quick.  The rainbow was starting to fade.  The sparrow said, “Now!”

As he started to pull he met the gaze of a scruffy sheep, standing on three legs, watching him. 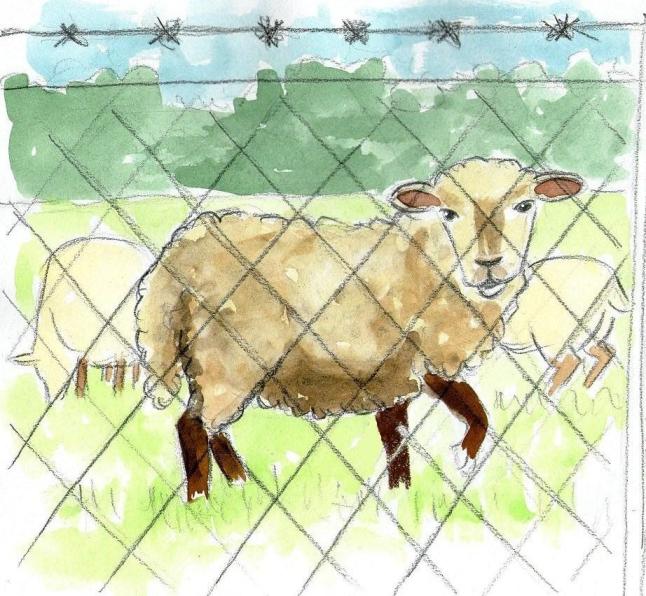 The carrot emerged from the soil, its rainbow colours soft and beautiful and Marcus said,

“I wish it was impossible to make money from animals.”

“What did you say?”  his mother asked, “did you say something?”

Marcus turned to look at her for a moment and then looked back at the sparrow.  The sparrow sang as sparrows do and flew away.  The seventh carrot lay on the ground, looking just like any other.  Had he imagined it all?  He looked up at the sheep but the sheep wasn’t there.  There had been a sheep field a moment ago.  The field of limping sheep.  But now it was an apple orchard.  Rows and rows of apple trees stretched as far as he could see, and they looked like they’d been there for years.

“That’ll do for now,” said his mother, “let’s go home for lunch.  You can play with your friends this afternoon.  Thanks for your help.”

They walked past a physic garden where the butchers used to be, and it smelled of lavender and mint.  Marcus smiled.

“Ah, the first smile of the day,” his mother teased, “glad you’ve got over having to get out of bed.”

“It’s a bit more than that,” he said.  “Don’t you notice anything different?”

“Nope,” she said, “It’s a bright and beautiful world as always, I hope that never changes.”

Marcus nodded.  “Me too.”  And they continued their journey home.

When they were nearly there his mother asked him, “What do you think you’ll do this afternoon?  Skateboarding and dinosaur safari at the adventure playground again?”

And they walked past the Adventure Playground where the Greyhound Stadium used to be. 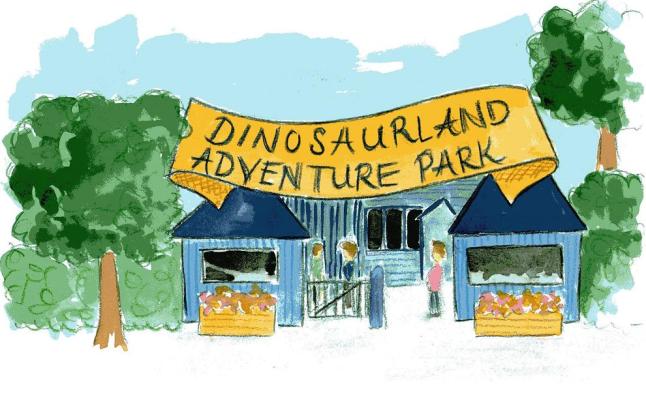 Marcus’s Wishes is included in the Little Chicken Book of Fairy Tales. (NB the book is in black and white with few illustrations) Click on the pic!