“We should do it with the lights off,” Luke suggested, “have you got any candles?”

“Dinner’s ready!” said Joe happily.  It was the first time he’d cooked dinner for anyone else and he was quite pleased with how it had turned out.  He put two plates on the coffee table.  “Jacket potato with beans and salad,” he announced.

“Thanks,” said Luke, “is there any beetroot?”

“What?”  Joe handed Luke the beetroot.

“It says here they’re good for meditatin’,” said Luke, referring to his library book, “but we’ll just have to do it in the dark.”

“What if we mute the telly and leave it on?  With the rest of the lights off, that’d probably be like candle light,” suggested Joe.

Joe picked up the remote and pressed play.

“I love this bit,” said Luke, waiting for Kathy Bates to say ‘yes, this is our planet’ before replying, in sync with Keanu Reeves and Joe, “No, it is not.” 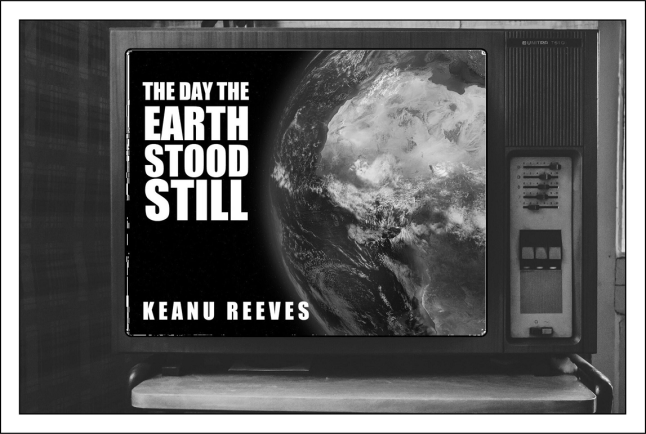 By the time Keanu had left the building, both diners were ready for dessert.  Joe emptied a tin of Fruit Medley into two bowls and brought them to the table.

“Mmm,” mumbled Joe through a mouthful of peach, pear and pineapple chunks, “there might be some doughnuts in the bread bin.”

“I don’t like pears,” said Luke, scraping the white chunks into Joe’s bowl.

“They taste different in grape juice,” said Joe, “I like ’em.”

“Good,” said Luke, “can I have your pineapple?”

“Because you didn’t want them.”

“You’re not getting my pineapple!”

Luke gave up and went in search of doughnuts.

“There’s nothin’ but bread in here,” he called.

“You’ve got your own bread bin?”

Luke found the paper bag which had once contained ten jam doughnuts.  There was one left.  “Shall I cut it in half?” he asked.

“I’m not surprised if you’ve eaten the other nine.”  Luke laughed.

Luke sucked on the edge of the doughnut until it was soft enough to bite.  “Why have you got your own bread bin?” he asked eventually.

“To keep my food separate,” said Joe, “from theirs.”

“You’ve got your own food?”

Joe changed the subject.  “We’d better get on with the meditation before Janet gets home.”

“It says here we should do it outside,” said Joe, “in nature.”

“erm, well, I suppose it’ll work inside … yeah, it says you have to be comfortable so you don’t get distracted.”  They sat on the floor facing each other and closed their eyes.  “We have to empty our minds,” whispered Joe.

Luke jumped up.  “Wait! I forgot to turn the lights off!”  He switched them off and sat back down.  “So what are we supposed to be thinking about?”

“Nothing.  Empty your mind.”

Luke was silent for almost fifty seven seconds.  “Shouldn’t we be thinkin’ about aliens?” he whispered, “I mean, shouldn’t we be callin’ them with our minds?”

“Not yet, we’re just learning to meditate.  When we get good at it, then we might be able to.”

“How long will that take?” asked Luke, opening his eyes.

“The more questions you ask, the longer it’ll take!” hissed Joe, exasperated.  “Close your eyes and empty your mind!”

Luke closed his eyes.  The room was silent.  Apart from the occasional passing car there was absolutely no noise.  Except that trickling sound.  What was that?  Luke opened one eye but it was too dark to see much.  The trickling stopped and he told himself to concentrate on nothing.

“Why have you got your own food?”

Joe tutted and got up to switch on the light.  “Do you want to contact the aliens or not?”

“You’re keepin’ somethin’ from me,” said Luke, “you can’t properly meditate when you’re keepin’ secrets.  It won’t work if we don’t trust each other.”

“We do trust each other.”

“Well you obviously don’t trust me coz you won’t tell me your secret.  An’ if you’re keepin’ secrets from me then maybe I shun’t trust you.”  Luke looked gravely at his friend and waited.

A few weeks earlier, Luke and Joe had been doing some important work after school.

“Hang on.”  Joe had let go of the bag while he searched the brambles and weeds.  He stepped back to open the bag for Luke who dropped another three half-metre lengths of barbed wire into it.  “I want a go with the bolt cutters now,” said Joe. 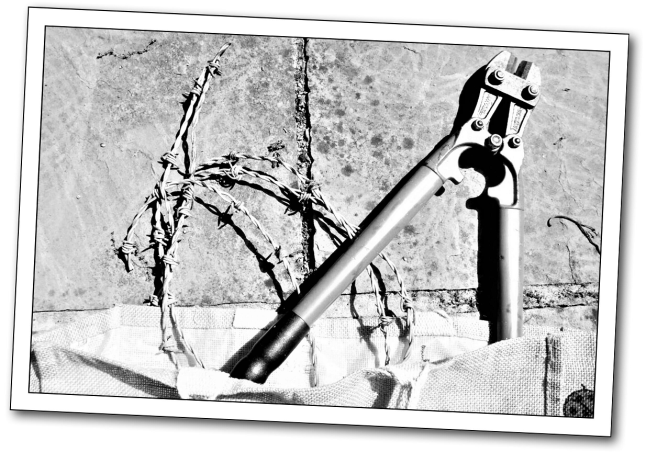 The field hadn’t had any crops in it for as long as the boys could remember.  It was just grass.  Sometimes there were deer, early in the morning, or just after sunset.  That’s what made Luke want to get the barbed wire.  It had been strung up a long time ago, between the field and the woods, and a lot of it was loose and trailing across the ground, partly hidden by dead leaves. Or it was hanging slackly between the trees.  It was a hazard for wild animals and needed to be removed.

“Thanks,” Joe cut the strand he’d found into manageable chunks and dropped them into the bag.  “Is there any more?”

“I think that’s the worst of it,” said Luke, “there’s plenty of safe gaps for the deer to come through now.”  He lifted the bag to test its weight.  “I think we’ll have to come back another day for the rest.”

“Okay,” said Joe, making a mental note to be the first with the bolt cutters next time.  He tucked the implement under his coat and Luke carried the bag.

“This can prob’ly be recycled,” said Luke as they walked back into the village, “it’s good metal.  They could melt it down and do somethin’ useful with it.”

“Yeah, like make …. something,” said Joe when his imagination failed him.  “Anyway, see ya.”

Luke turned right into the cul-de-sac and Joe continued for another five minutes before coming to his own house.  He usually went in through the front door but because he needed to return the bolt cutters to the garage first, he went in the back.  He opened the door just in time to see his mum dividing a tray of minced lamb between the large casserole dish and the small one.

Joe was stunned.  “What are you doing?”

“Oh good grief!” exclaimed his mother with her hand on her heart, “you gave me a fright!  What are you creeping about for?  Make some noise when you sneak into a room!”

Thursday was shepherd’s pie night in the Currant household.  Joe’s mum used minced lamb for everybody else but she made him a separate one with soya mince.  He loved shepherd’s pie.  He’d always loved it.  It was his favourite meal.  That’s why, in spite of everything she’d said at the beginning, she made a separate one, just for him.  It was so nice for Joe to know that his mum was finally listening; finally respecting his choices and doing her best to accommodate them.

“What are you doing?” Joe asked again.

His mum paused briefly before baring her teeth in an embarrassed grin.  “Ah, you caught me.”

“Why are you putting lamb in my dish?” Joe’s pained expression made her feel a little bit guilty.

“Is that right?” said Mrs Currant, her sympathy chased away by her son’s insolence, “well you haven’t noticed for the last three months!”

“What’s the difference?  You didn’t notice!  I ran out of your stuff in December but I knew how disappointed you’d be if you couldn’t have your precious shepherd’s pie so I used real mince.  Just this once, I thought.  What he doesn’t know won’t hurt him.  And I was right, you couldn’t tell the difference.  You loved it!  So I took that as a sign.”

“A sign of what?  That your son’s an idiot for trusting his mother?”

“I don’t like your tone young man and if you don’t apologise this minute I’m going to tell your father!”

“Me apologise?  You lied to me!  I can’t believe I’ve been eating meat for three months!  I feel sick!”

“Oh stop being so melodramatic!  You ate meat for years before you started on this fad.  And the rest of us still do. Do you find us disgusting?  Is it so disgusting to eat food made in this kitchen?”

“It depends on the food,” said Joe, “and it depends who made it!”

“Really?” Mrs Currant was outraged.  She’d never seen this side of Joe before and she didn’t like it one bit.  “Well, since I’m the only one in this house who makes the food, that’s going to be a problem for you isn’t it?”

“No,” said Joe firmly, “because you’re not going to make my dinners any more.  I’ll make them myself!”

By the following day Joe’s anger had given way to shame.  He was ashamed he hadn’t been able to tell he was eating lamb.  Even more ashamed that he’d enjoyed it.  He decided then and there he could never tell Luke.  Not ever.

There was a long, uncomfortable silence in which both boys pretended to read.  Joe didn’t dare tell Luke his secret and Luke was hurt by Joe’s lack of confidence in him.  There was no one else in the house.  Joe’s parents were away for the weekend and Janet, who had been left in charge, had gone to a party.

“How long ’til Janet’s back?” asked Luke eventually.

Joe looked at the clock on the wall.  “I’m usually asleep before she gets back,” he said, “what time have you got to go?”

Joe felt sad.  “I keep my food separate coz my mum lied to me,” he mumbled.

“She gave me meat – for three months! – and I didn’t know.  I didn’t know but I was eating lamb!” his voice trembled with emotion.

“I liked it,” he confessed in a barely audible whisper.

“Joe.  Listen to me.”  Luke’s voice was quiet but firm.  “It’s not your fault.  They make soya things taste like meat on purpose so people who like meat will eat it.  You didn’t know.  An’ I know that for a fact coz I know you and I know you wouldn’t have eaten it if you’d even suspected it was meat.”

Joe felt the huge weight he’d been carrying fall away.  He looked up at his smiling friend and smiled back.

“So you have your own separate food?”

“D’you buy it yourself?”

“D’you cook it yourself?”