Story continues from yesterday.  For the story so far, click here 😀 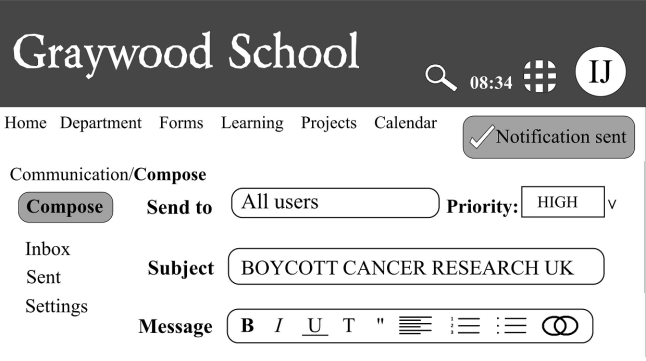 The following are just a couple of examples of the horrible things CRUK has done:

Researchers funded by CRUK conducted experiments on nude mice in order to give them bone cancer [nude mice are bred in laboratories with a genetic mutation which causes a deteriorated or absent thymus, resulting in an inhibited immune system and no body hair].

The baby mice had cancer cells injected into their hearts. The male mice received prostate cancer cells and the female mice received breast cancer cells. These cells were made to glow so that tumour growth could be identified while the animals were alive. This was also confirmed after their deaths. Over several weeks the animals developed tumours in their bones and some, who had been injected wrongly, developed tumours in their hearts. The animals were killed at various times after the injection into their hearts.

CRUK co-funded a complex study on rats and mice designed to investigate whether disrupting a particular network of proteins could help treat bile duct cancer.

Three different types of animals were used:
Nude mice were injected under the skin with tumour cells from people with bile duct cancer. After three weeks some of them were given treatments to reduce the severity of the tumours.
A second group of genetically modified mice were chemically poisoned for around six months so that they would develop cancer.
Rats were subjected to the same chemical poisoning regime as the mice. After about five months, some of them were given substances designed to target the tumours. One of these was the treatment that depleted levels of some white blood cells (macrophages) and therefore damaged their immune system.

While being very secretive about the specific details of the animal research they fund, CRUK states:

“At the Cancer Research UK Manchester Institute, we only use mice.  We breed some strains ourselves and obtain others from suppliers who are licensed to supply animals for research.  Most of the mice we use have altered genetics”

When considering this one should be aware that the creation of GM mice generally involves several painful and invasive procedures, including major surgery and mutilation.  Creating just one ‘founder’ mouse with the required genetic alteration can entail the deaths of hundreds of others. These unwanted mice are often killed by being gassed or having their necks broken.

It is incomprehensible that CRUK continues to waste its supporters’ money on animal research despite the fact that pharmaceutical companies acknowledge the failure of animal-based research in their drug development process and write about this openly and often in the scientific literature.

A leading oncologist, voted one of America’s Top Doctors, Dr Azra Raza, made the absolute failure of mice models of cancer the focus of her
TED-x talk:

She said:
“The fact of the matter is, that we cured acute myeloid leukemia in mice back in 1977 and today, in humans, we are using exactly the same drugs with absolutely dreadful results.  We have to stop studying mice because it’s essentially pointless and we have to start studying freshly obtained human cells.”